Part 18 of 28 in the realms of Savage Space! This time...a very real threat from beyond...dark matter aliens! 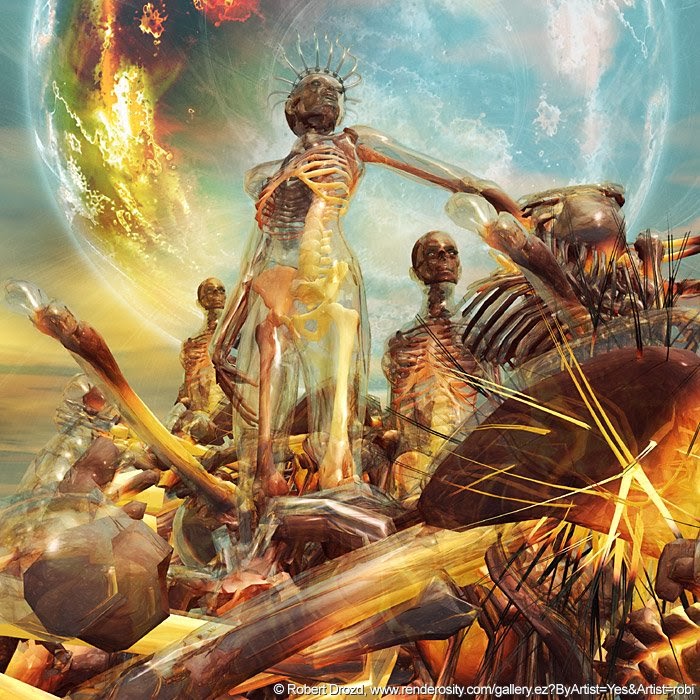 Not all aliens are from our galaxy, or even the universe itself. The cyndaar are transdimensional dark matter beings, first discovered during experiments with working fold-space technology on the moon of Hamminar by fadelik scientists trying to crack the enigma of Coreward Expanse lost technology. The fold-space engine opened a portal, and out of that portal came the cyndaar. The first contact was a disaster; the cyndaar appeared to be inhumanly cruel entities comprised of non-baryonic matter, capable of enveloping any organism and manipulating it as an unwilling host. The good news (if such could be said of it) was that identifying a host organism as easy: the "envelope" which the cyndaar formed around the host created a translucent, x-ray like quality to to the flesh of the target organism, making them look like they had invisible flesh wrapped around bone.

Cyndaar are dangerous to an extreme; they have access to potent psionics, regard all conventional "baryonic entities" as host organisms for their invasions and appear to be singularly interested in causing great strife and suffering when they appear. Luckily it is extremely uncommon to encounter the cyndaar; the Federated Commonwealth has placed tight controls on experiments with the theoretical fold-space drive until it is better understood just how the cyndaar are "pulled through" when such technology is activated. A few researchers have dedicated their lives to determining if the cyndaar are a cause (if not the only cause) of the extinction of the four million year old Coreward Expanse civilization. At least one researcher, Dr. Charles Vaas, has suggested that the link between the ancients and the cyndaar may be more disturbing...that the cyndaar could be evidence of some sort of transmigration of the lost civilization, or some sort of shadow of their existence mirrored in whatever non-baryonic dark matter they are comprised of.

Since the incident at the moon of Hamminar there have been a half-dozen additional events involving cyndaar, including one which appears to have been an incursion they initiated on Asteriod Station Promethus. At Prometheus a cyndaar who called herself Elliquida and seven others manifested, enacting a sort of hell on the living before Mining marshal Ashton Quinn detonated the mining charge reserves on the station, blowing half the asteroid out of existence and the cyndaar, apparently, along with it.

The cyndaar are non-baryonic (dark matter) lifeforms, which can force an "interaction" with baryonic life (all normal life in existence) when fold-space technology is used. How this happens isn't entirely understood, but when it does happen they have a matter of minutes to latch on to a host, which turns into a puppet through which they can act. The host is attacked immediately with an attempt at possession; hosts which succumb usually become permanently altered after about 12-24 hours of control by the cyndaar.

Agility D10, Smarts D12, Spirit D12, Strength D6, Vigor D8
Skills: Fighting D10, Notice D12, Intimidation D12+2, Stealth D12+2, Psionics (D12+2)
Pace 8, Parry 5, Toughness 6 (18 vs. disintegration)
Special Traits:
Dark Matter Creature: cannot be harmed by normal matter attacks in any way; disintegration effects will work on them however, as will psionic attacks.
Disintegration Resistance: cyndaar have Toughness +12 against disintegration effects.
Fearless: immune to fear and intimidation.
Psionics: cyndaar have psionics and start with 30 power points.
Possession: the cyndar has 3D12 minutes from the time it enters "normal space" to possess a target host made of normal matter. The target host is immediately subject to an opposed test of the cyndaar's psionics skill vs. the defender's spirit. Failure means the cyndaar gains control of the host. The cyndaar's host form is subject to attacks and other issues as normal, but acts under total control of the cyndaar. The host's flesh becomes translucent after this possession. Once per hour the host may make an opposed test of it's spirit vs. the cyndaar's psionics, gaining a -2 penalty after the second failure to future rolls. If the host makes the roll the cyndaar is "rejected" and the host is immune to further possession attempts. If the host remains under cyndaar control for 1D12+12 hours then the host's mind is wiped and the body is permanently altered by the connection with the dark matter cyndaar.