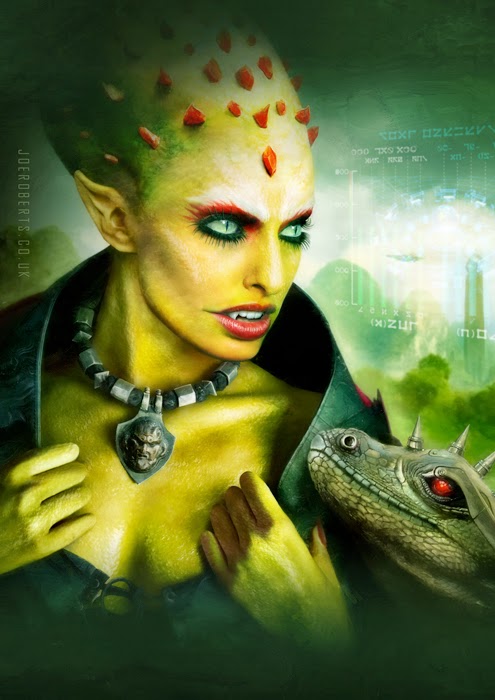 Of the seventy nine intelligent species that have been encountered by humanity on its slow conquest of the stars, seven have had humanoid forms and physiology similar to humans. The fadelik are a herbivorous example of such, but the chevareis are a decidedly reptillian and distinctly carnivorous version of the same.

Chevareis had not discovered interstellar travel when humans ran into them; it was a first contact scenario between superior interstellar powers and local indigenous aliens which had been fighting for resources in their native star system after a nuclear war rendered the chevareis homeworld (called Sitar) nearly uninhabitable. The chevareis themselves almost seemed like a multitide of species to the first contact officers of man until they realized that the species, despite a lack of familiarity with transitional drive technology, had mastered transgenic technology; the chevareis wore many guises, but were all genetically identical at the core.

The spacefaring survivors of the chevareis were quick to appeal to the colonial human sense of decency, and in so doing were sold the technology to make their own transitional drives. Within a decade the first chevareis explorers were migrating to other star systems, like nomads or gypsies, seeking out whatever they could, whoever they could. The legacy of their own system, fraught with war and destruction, populated only by survivors who had learned to sustain themselves off of a dozen harsh worlds and moons, was a thing of the past.

Today, chevareis are known for being curiosity seekers, explorers, mercenaries, masters of transgenic technology and also for not getting along with the fadelik, who worry that the propensity for violence and warfare among the chevareis have not left them as a culture or a species. The chevareis, given their ability to kill with great efficiency and no mercy when needed, remain prized for this talent.

Poisoned Claws: chevareis have sharp, needle-like claws that exude a mild toxin. Modern chevareis have long ago altered the toxin to near universal effectiveness. They gain claw damage of STR+D6 and +2 AP; the toxin causes those shaken by the claw attack to make  Vigor roll or become paralyzed for 2D6 rounds.
Racial Enemy: fadelik despise chevareis, who have a -4 charisma modifier when dealing with the herbivores.
Bloodthirsty: chevareis have a natural but subtle aggression that comes out in battle.
Heat Resistant: chevareis are used to dealing with hot extremes and gain a +4 modifier to resist heat effects.