This is harder than it looks! 28 days of scifi posts for Savage Worlds. Today....aliens! 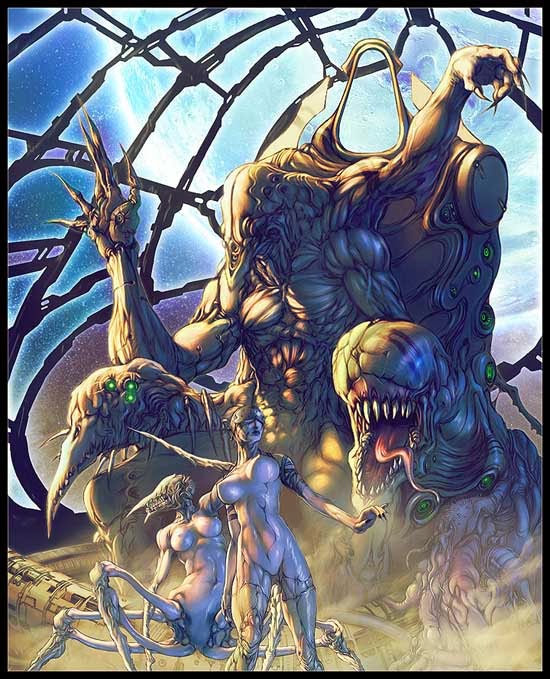 The biomachines that originated at Deneb are well known for their voracious ability to assimilate all machinery and flesh in their wake. The first encounter with the "Yanoh Sutah" as they were originally named by the Haskiren nomads was during an encounter with the early colonial cruiser ISS Hapford, not more than a century after humanity developed FTL drive. A routine survey mission revealed that the Deneb star system, long believed to be too volatile to sustain life, in fact had what appeared to be a thriving stellar society in the dominion of its Kuiper belt. No sooner did the Hapford make contact than it was attacked; the Yanoh Sutah had been clustered on the edge of the star system, creating vast colonial hives of sublight ships; capturing a FTL cruiser would be a major prize.

The Hapford escaped, narrowly avoiding destruction, but unknown to the crew it came back to it's homeport (Alpha Centauri at the time) carrying a trace of the nanovirus that was the real force behind the Yanoh Sutah. The near-total assimilation of the Alpha Centauri Orbital starport and the Hapford was staved off only by virtue of the assistance of the Haskiren who provided the necessary antivirus that they used to keep their own equipment clean of the Yanoh Sutah infestation.

To date the Yanoh Sutah is the only known manifestation of a nanovirus which is specifically designed to absorb, replicate and produce biomechanical machines. The virus is suspected to be a creation of a now dead culture, likely at Deneb, which may have attempted to devise a form of Van Neumann machine culture to assist in escaping their dying world. Unfortunately there is no obvious candidate in the Deneb system for a suitable homeworld; as an alpha-cyngi variable star it is extremely large and luminous, and the "goldilocks" zone for life is too unstable to be a likely candidate.

A second hypothesis is that the Yanoh Sutah arrived at Deneb by slower than light means, and in fact became trapped there, looking for resources on the fringe of the Deneb system to resume their journey when the Hapford conveniently came along. The fact that the Haskiren claim to have encountered this virus on other worlds, and that it actually destroyed their own homeworld generations ago, supports this hypothesis over the Deneb origin theory.

Someone injured by a Yanoh Sutah must make an immediate vigor check at -2. If they fail, they become fatigued. Each day they continue to make checks for one week; each failure reduces Toughness by 1 until they hit 0 at which time the person is now a biomachine of the hive. Being injected with the Haskiran antivirus gives them a +2 on checks, and the first success clears the virus out.

A human or other alien who is subsumed into the biomachine hive gains the following traits:

No Free Will: though they can make individual decisions as needed, the hive mind prevents any action that works against the interest of the hive.

Defensive Claws: gain these claws (STR+D6 and 4 AP) which inject the virus on a strike that deals damage.

Dermal Plating: gain dermal plating at a +4 for armor protection.

Techno Obsession: Yanoh Sutah victims will voraciously pursue those they believe to have previously undiscovered scientific knowledge, usually to the exclusion of all else, including their well-being.