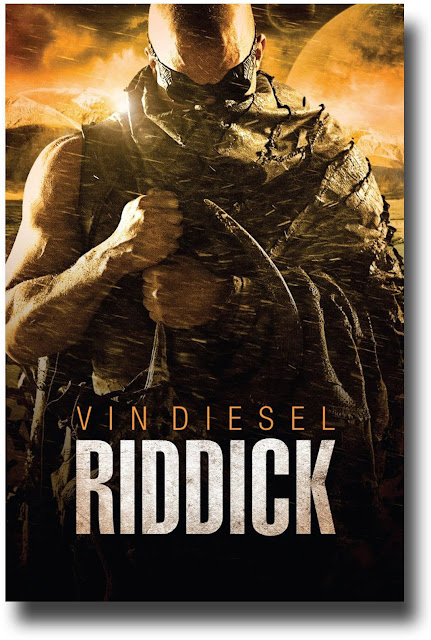 First off, I liked it. And as a bona fide Riddick/Vin Diesel junkie who has watched all of the movies many times and played the games through twice, you can assume I am biased. That said, I think this movie did a lot right.

I can summarize Riddick pretty quickly: Vin Diesel and David Twohy realized that the coolest stuff from the prior films and games were "hostile fauna," "treacherous shit hole worlds," and "mercenaries who HAAAAATE Riddick with a passion." Then someone said let's put Hawkeye AND Starbuck in...and an impressive CGI alien dog that steals half the film, and lo' there was movie magic.

The actual story starts with Riddick in bad shape, dumped on an alien world with a lot of hostile wildlife. it quickly summarizes how he got here from his last appearance (and neatly wraps a bow around the Necromongers and sends them packing) then proceeds to give us a lot of Riddick doing what he does best: surviving against all odds. Along the way he picks up a local alien canine, which quickly becomes a real darling.

If you don't like Diesel as an actor, or don't like his characters, you probably won't be swayed by this movie even if I do tell you that it toys with the idea that even Riddick is fallible. What this movie does extremely well is make you want to play a down and dirty Traveller game, because this movie is a big budget CGI example of a backwater planet with an impressive array of creature encounters rolled up in detail, and filled to the brim with professional mercs, one treacherous wandering assassin and an occasional sympathetic character.

The movie isn't even just about weird SF survival horror (even when it is). It manages to flit about between surviving a hostile world, hostile mercenaries and ultimately a touch of redemption...or at least understanding. I'm not sure I fully bought in to the character arcs as presented, but it was still a fun ride to see everyone play out their weird little drama-with-guns-and-shivs.

The movie has two tropes which rear their ugly heads, one of which it deftly avoids, and the other of which it sadly spins right into. Spoiler alert, read no further! Trope avoided is a potential female love interest that is played up very quickly and then gunned down just as fast. Trope hit head on is the valiant and show-stealing alien canine which perishes while saving Riddick. I suppose you could label all the "Riddick is so 'effin cool" moments as tropes too, but let's be honest....if you didn't come to this movie expecting (and wanting) to see Riddick being cool then you might want to look at investing your ticket money more wisely.

I had one gripe....and it's a hard one, because my wife did not see this issue. Merc Dahl, played by Katie Sackhoff (alias Starbuck) comes of as a tough as nails, cruel, man-hating lesbian merc. During the film she gets played off as maybe less "lesbian" and more "Red Sonja," in so far as apparently she just needed a man tough enough to tame her...a bit (guess who that guy is). Part of me liked this weird personality Dahl exhibited, and part of me felt like "this is going to offend some people on the interwebz, a lot." But my wife loved her character, so what do I know.

The film ends in as open a way as you can get, as all Riddick movies do: ready for a sequel. I hope we see another one before Diesel hits retirement age, though....

So was it worth it? For me, absolutely. This is the sort of movie I desperately need to see after a gruelling week of overtime in meetings and debacles all week. I will get it on Blu-Ray and watch it several more times. When my son is old enough I will enjoy it with him, as well. Also, think I'm gonna break out Traveller and the "Animal Encounters" supplement for some SF survival planet gaming soon. This movie definitely put me in the mood!

Posted by Doctor Futurity at 11:42 PM