This can be a tricky one, because there are merits to every edition, and people tend to favor the ones they got the most out of over time. I like each edition of D&D for different reasons, but I have to say that it was AD&D 2nd edition that was the version which I got the most mileage out of over time. Even though I am no longer so enamored with it, it's still the edition that I played the most (at least until 3rd edition, combined with my time in Pathfinder). Why? 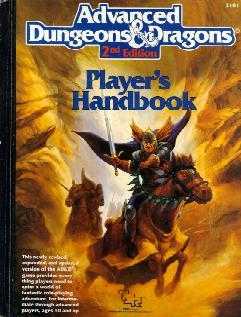 2nd edition AD&D was the version that started looking at the broader picture of fantasy gaming. It wasn't just about dungeons, it tried to shed some of the more stoic and crusty mechanics of 1st edition and utilized a style that was more appealing to people who were interested in gaming and enjoying the story as much or more than crunching numbers on their character sheet. I've heard 2E criticized for dumbing down the text a bit, but honestly I enjoyed the more readable and easy-to-use, easy-to-reference approach to 2E. The fact that AD&D 2nd edition cleaned it up so much, made it easy to use....it was a huge, huge bonus. It was a game that demanded less effort to master than its predecessor and other contemporaries (in retrospect I have to scratch my head at what possessed me to run Dragonquest for a whole year, for example!)

2nd edition introduced the idea of multiple settings for D&D, a different flavor to cater to different audiences. Ravenloft as a setting, Spelljammer, Planescape....all AD&D 2E. It also introduced bad business practices (thanks Lorraine), or at least accelerated them. The novel lineup for AD&D got dramatically more robust in this period.

When 3rd edition arrived it was time for a clean-up. AD&D 2E was getting crusty by then, and the game was getting too convoluted in the post-Player's Option era of expansions. That said, 3E introduced its own set of problems with mechanics that despite an aim toward a unified resolution mechanic remained as arcane as ever. All I really wanted out of 3rd edition was "2E, but with better multi-classing options." 3E did introduce a lot of new concepts I ended up embracing....but it never felt quite as accessible and easy as 2E, and only got worse over time as the char-op mini-game permanently changed the way D&D was played.
Posted by Doctor Futurity at 6:00 AM