Day 27 - A character I want to play in the future

I'd really like to play a witch in Pathfinder, or maybe an inquisitor with a bit of the Solomon Kane vibe. If I ever got a chance to play in a 4E campaign with a DM I coud tolerate (I've had some awful experiences with 4E as a player) then I'd try a warden out, or default to my favorite class, the warlock. In 1st edition I'd love to try an assassin, as I never ran one as a player before. In 2E I always loved paladins and bards, but would love to try a really exotic priest of specific mythoi some day. In 3rd edition there were so many choices....probably try out the 3E warlock sometime, though!

I also love this image, would base something on it: 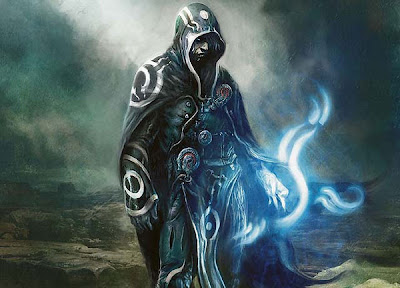 In terrms of personality....I usually work that out on the spot, so I don't have any hard personality for a prospective future PC to speak of....though it would probably be brooding, or sarcastic, and have a flip side (like a wizard who wanted to be a warrior or a warlock who doesn't like consorting with demons).
Posted by Doctor Futurity at 6:00 AM