Day 8: Favorite Character You Have Played

This is a tricky one, and I assume it means "played as a player" because I have countless NPCs I've handled over the decades, and I mostly GM. That said, I have played a few characters of note...

I think my fourth favorite character was a very simple one, a polearm warrior from 2E named Lakuna Helbyrn. She was a tough, no-nonsense warrior woman with a halberd who wore lots of black, kept her hair short, and survived multiple tournament adventures over different conventions. She was an anrgy man-hater with probably more than a little Red Sonja in her. I made a version of her in "Pool of Radiance" as well (along with Rik Kochet below).

There was Erik the Paladin, who also got co-opted as an NPC later on, who played in my friend Terry's brief games as he tried to DM (and did a good job at it) chasing down a mad lich in the Forgotten Realms. He was a noble idealist, typical paladin, for whom the moral vision of the world was black and white.

There was the gnome halberdier (yes, a gnome with a halberd) from my 1E days named Rick Kochet (groan please) who was noted for charging everything with his polearm flailing about. I was later allowed to revive him for a short Pathfinder campaign a few years ago, though I admit to being largely less interested in that game than I once was....I've found that my enjoyment as a player is far, far lower in recent years; GMing is where it's at for me, I've done it too long to feel otherwise.

Of all of them though my first and most favorite was Gilrad, who started as a 1st edition fighter and bounced between being an NPC and a player character for me. He was one of two survivors of a whole team of adventurers in the caves of chaos. He was a burly blonde barbarian of the north, who over the years encountered a temple to the god Death itself and was given the sword Rishelka, the Ruby Death (Nine Lives Stealer), subsequently prompting him to dual-class into cleric. He was mostly an NPC by my 2nd edition days, but I played him whenever I could for years in the eighties. He was a cypher for Fafhrd, Conan, Kane and other prominent literary heroes I admired in my youth, and he was effectively my first D&D character. He's still out there somewhere, an avatar of the god Death, deathless thanks to the Immortality Stone, and maybe way past due for a guest appearance. Admittedly, he tends to stay out of sight these days because as GM I am keenly aware he'd be something of a darling and a show-stealer, so better for him to work surreptitiously in the background as a patron for younger, fresher heroes! 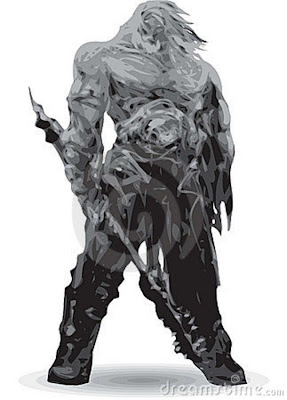