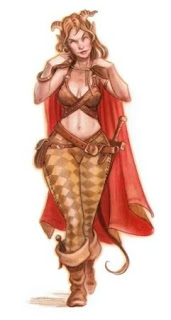 The tiefling, because they are singularly unique to D&D in a great many ways, reflecting a racial option that is defined by the planar cosmology and all of its alaignment-coded monstrosities commingling with normal folk to create a devilish race that can fit many niches, from hapless underclass scalawags cast down from society by virtue of poor breeding to the fallen descendants of a lost empire that made a deal with devils. Tieflings are reflective of other races that have been in fantasy for a long time (deevils, for example, from Myth Adventures), but humanized and made accessible to ordinary players. 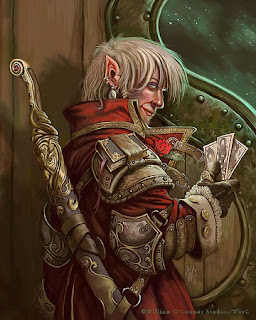 And the Gnome, because the gnomes of D&D have transcended their roots in literature and folklore to become another race singular to D&D. Gnomes can be earthy folk, tinkers of technology, alchemists, quirky, madmen, thieves, murderers, all-around nice guys and sometimes even bad-asses. Gnomes have been portrayed in many ways through D&D's history, and have been been ripped off by Blizzard when making World of Warcraft. It is a rare campaign that I run in which a gnome NPC doesn't play some importance, proving either useful or vexing to the players.

If I had to choose I'd pick tiefling by a hair.....but I hate to choose!