Well, this would seem to be a question that depends on edition. I have a class or two in mind that transcend editions. I am very partial to the warlocks of 4th edition, for example, and whenever I got to play back in the 2E days I tended to favor paladins. That said, my favorite class would have to be... 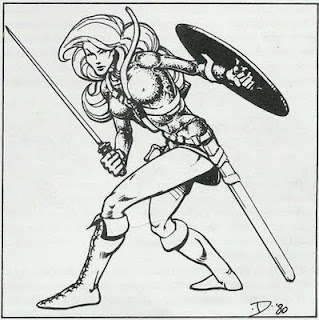 ...the fighter. He's basic, functional in almost any environment, and his all-purpose utility of being able to hit things, hard, and get hit a lot in return makes him the best and most efficient class for "getting the job done."

Sure, you've probably heard lots of complaints (usually in specific editions) about how his versatility is shadowed over time by the mage....but the fighter tends to remain the hero, despite the mage's impressive potential. Some versions of the fighter are also pretty impressive, and even when he's at his most threadbare his ability to dish out and take damage round after round still means that long after the spell casters are begging for a nap he's usually still ready to charge in to action.