Day 28 - A character I will never play again

Hmmmm.....there are tons of characters I'll never play again, probably because they are all dead or retired....but I guess if we're thinking in terms of archetypes, then I'll probably continue to avoid the "cheap comedy relief" character. Not that I don't include NPCs that are intended to offer a bit of levity, rather that I would never include a character who is there to suffer the role of fool to the detriment of any other reason. In the 80's I had a tendency to include at least one NPC in my games whose purpose was to be the butt jokes; Ookai the fat, bumbling orc warrior was a favorite of mine. Many years later I made amends for poor Ookai and brought him back as an NPC with a bit of depth, estranged son of an orc warlord who neither wanted the power of his father nor the evil nature of his kinfolk, and just wanted to enjoy a good pie....okay, so maybe I didn't totally make it up to him! 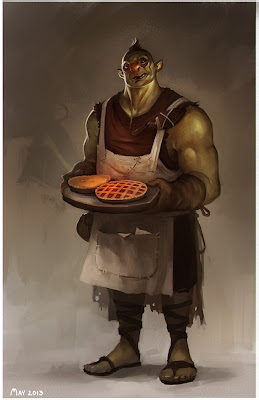 Email ThisBlogThis!Share to TwitterShare to FacebookShare to Pinterest
Labels: 30 days of dungeons dragons, orc with a pie