This is a hard one, because if there's something I have a bad habit of doing it's manufacturing entire pantheons (when I'm not slaughtering said pantheons in the name of a good setting). The world of Lingusia setting has around a hundred deities over several pantheons. My Chirak setting is full of dead gods but lots of avatars and demiurges trying to steal their lost power. Enzada is a setting built on the premise of all the deities, everywhere....hundreds, maybe thousands of gods ranging from cosmic lords of chaos to petty kitchen deities of curdled milk. My under-exposed Irkalla campaign is focused entirely on old Sumerian deities. The Sarvaelen campaign has one official deity and a plethora of mythoseque old gods.

All that said, if I had to choose, I guess I'd go with Hermes, the Greek messenger god. 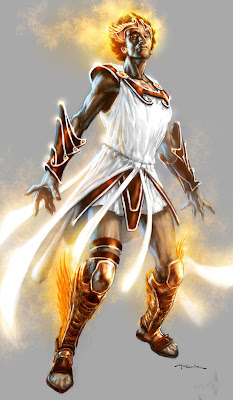 Why? Well, from 1981 through 1992ish Hermes was part of the patchwork pantheon of my original Lingusia campaigns, primarily as an instigator, messenger and also patron of thieves and tricksters. He was the patron deity of my sister's favorite character, and often intervened at odd moments to provide clues and minor assistance to the adventurers, being a deity who by his nature was allowed to interact directly with mortals without consequence (the old days of Lingusia emphasized a sort of Cold War between the gods of order and chaos, and if one were to intervene with mortals on one side, the other could retaliate in turn; Hermes was for odd reasons considered exempt).

Hermes is also a good example of a somewhat whimsical god, one who is allowed a certain measure of kindness and almost a trickster god, but without the usual baggage that comes with the label. He's usually on the side of mortals, and actually works to aid man against the uncaring habits of his fellow deities. Hermes is cool, in other words.

I need to bring him back into the game again, someday. Hmmm.
Posted by Doctor Futurity at 6:00 AM