In my stable of NPCs I have a vast array of characters that I like to pull from. Some of my favorites include Moloron the inquisitive tiefling warlock who had the audacity to harness the power of a god in torpor, or Phyxillus the elvish empress of Hyrkania who was as prone to drawing blade and book to solve her realm's problems as she was to outsource the job. My favorite NPC in a long time, though, is Lady Poe.

Lady Poe is a background villain, and not the sort of woman to seek out an active conflict if she can avoid it. She's rules her realm of Kasdalan for centuries, after banning the practice of magic among men, and had given birth to dozens of daughters (boy children are usually put to death). He goal: a hegemony of female sorcerers who rule with an iron fist. Her failure? Her first love, the wizard (and something more) named Zam Redar.

Lady Poe is meant to be the wicked witch, the evil queen, the vicious sorceress and the conniving love interest who betrays the protagonist all in one package. She once angered a party of adventurers so much that they methodically tried to hunt down her daughters one by one just to spite here. She's largely behind the scenes, but her presence is always felt when someone gets too close to her sphere of influence. 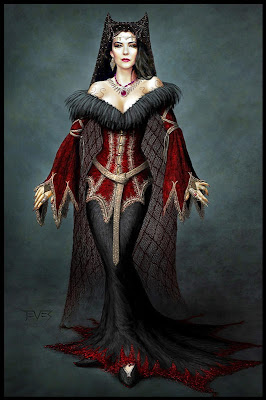