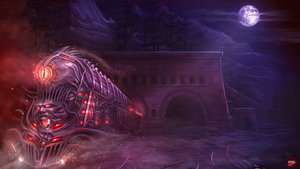 Tenkar scooped this one from a Kickstarter post on the Horror on the Orient Express...which I had no idea was still in a "indeterminate fulfillment" stage but apparently it is (ironic considering I bought a retail big box and have it on my shelf). As always beware the backer. But...well, go over to Tenkar's Tavern and read the excerpt for yourself. Short version:

Greg Stafford is back as CEO and President of Chaosium.

Sandy Peterson is also back.

They are going to look deep into the heart of Call of Cthulhu 7th Edition and....rip it out? I have no idea. It's intriguing to wonder what's up. The 7th edition of CoC has been sitting on site as a PDF for a few months now, but no word on a print release. I guess Chaosium has had some money trouble....not really surprised....

Finally promises of returning to making awesome games. I hope BRP and Magic World remain on that list. Especially MW since I don't think they can extract Runequest 6 from the Design Mechanism. Or....can they? Who owns the RQ licensing again? Hmmmmm.....

Posted by Doctor Futurity at 11:09 PM