Playtest Update #1: I am revising how to do quick and dirty hit points based on my playtest experiences tonight.

As I was mulling over my recent Swords & Wizardry Complete acquisitions it occurred to me that at its core there is a single on-the-fly method to use S&W stat blocks with minimal or...seriously...almost no "real" conversion at all in D&D 5E. In fact most of the conversion work would be in guesstimating DCs for saves and skill/ability checks; the stat blocks themselves can be used with some simple rules in place for quick on-the-fly numeric conversion. The new method below will work with any 1st edition stat block as well, and I think is a bit cleaner than my prior system for conversion.

Here are my conversion method suggestions so far:

Preamble: before converting something in a S&W Complete tome from Frog God make sure they didn't do it already in Fifth Edition Foes; and remember a significant number of the creatures in Monstrosities are already in the 5E MM.

1. Hit Dice
I've mentioned in a prior conversion that you could figure "5E HPs" by looking at the hit dice of the monster and comparing that to the equivalent CR on the table on page 274 in the 5E DMG; there's a simpler formula that gets a good approximation:

The Dirt Simple Hit Point Method: Roll HD as normal (or figure from an average; usually 4.5) and multiply by 4. This will generate a wider range on the hit dice and avoid uniformity. You should still roll regular hit dice for humanoids (like humans and elves) that normally progress with levels, however. PLAYTEST UPDATE: I didn't like the hit points this way in tonight's game, and have revised this to work as follows: use regular hit dice rolls for level/class based humanoids. Take the hit dice, roll or multiply by the average (4.5) and then multiply by 2 otherwise (shortcut: take HD and multiply by 9). X4 is a lot of hit points...do not use unless you want to challenge the party, or have a lot of high damage dealers in the group.

2. Armor Class:
S&W's armor classes include an ascending scale that is very close to what 5E uses....you rarely see S&W ascending ACs that are higher than what you normally see in 5E. If you're using a non-S&W stat block for conversion, or a module for S&W that uses descending AC, remember the formula: subtract descending AC from 20 for 5E AC.

3. Saves:
On the saves, I think you could give S&W conversions a bit of oomph and also simplify your math by dividing HD by 3 and rounding down; apply this modifier to any saves the creature makes in lieu of determing attributes. If the creature has a noteworthy stat mentioned in its description, apply a +3 or +4 bonus for that stat's saves only.

4. Attack Rolls:
There are a few ways to do this, neither is any better than the other, but I settled on the following because it is easiest to do on the fly:

The Dirt Simple Attack Bonus Generator: use the HD as the attack bonus. This may mean the monster is 1-2 points higher on average (or lower) than the option one conversion, but it works just fine and is going to give you a range that will be level appropriate or even superior to other monsters without being out of bounds. Bump this up by +2 if the creature is noted for exceptional strength (or dexterity if ranged or finesse) on specific applicable attacks.

5. Initiative Bonus:
In 5E very few monsters have an initiative modifier beyond Dex. My suggestion is divide HD by 3 (round down) and provide as the init mod/Dex mod. If the creature has a noteworthy Dex, use the mod you settle on instead.

6. Damage:
I have worked out three methods, but personally default to the preferred version:

The Preferred Quick and Dirty On the Fly Damage Conversion: add the hit die number to each damage set rolled. So a 5 HD beast with 3 attacks dealing 1D4/1D6/1D6 (average damage 9.5) now deals 1D4+5/1D6+5/1D6+5 (average damage 24.5). If you want a really tough boss monster then add double the HD to each damage roll.

If you compare the above to our HD determination method, to use the example a 5 HD monster has 90 hit points (average) on conversion....going by the DMG chart on page 274 that means it's average damage expression is around 15-20, so we're higher than the average for defense CR right now, which is just fine, I assure you.

Option 1-The Extra Dice Method: treat hit dice as extra damage dice instead. Add those damage dice evenly as multples to the existing attacks. So in the case above with three attacks dealing 1D4/1D6/1D6 from a 5 HD monster, you have 5 extra damage dice to deal: adding it evenly works out as follows: 2D4/3D6/3D6 (for average damage of 24); you can fudge it to make attack expressions line up properly (in this case we assume the D6 attacks are claws so they'd be equal).

Option 2-The Extra Deadly Straight Multiplier Method: if you want the monster to be a terrifying threat, do this. Just multiply the damage rolled by the hit dice of the monster. It's up to you if you multiply any adds, but strictly by the 5E rules you shouldn't. So a 5HD monster with  1D4/1D6/1D6 expression in this gets a damage average of 47.5....yowza!!!! but it does make the monster hit much tougher.

8. Converting Save or Die Effects:
For save or die effects, to convert to 5E I suggest the following: figure the damage type (i.e. necrotic or poison), then change it to a save vs. DC against appropriate stat from step 7 above. Then have the attack deal dice of damage of that type equal to the HD or the monster, using D8 (or higher if it seems appropriate). Problem solved. EX: A 7 hit die creature has save vs. poison or die. Convert this into a Save vs. Con DC 15 or take 7D8 poison damage (or 1/2 on successful save). Convert other effects precisely, but maybe add a save after 1/0th of the time has passed for the effect to shake it off. EX: save vs. paralysis or become paralyzed for 1 hour. Allow a save to recover after 6 minutes. Another example: creature does a paralysis for 1 minute, so let the victim save after 1 round.

A little secret: this is going to be a houserule for my upcoming S&W Complete game; I never liked save-or-die even in the 80's, so all save or die effects in my games will deal damage equal to the hit dice instead.

9. Magic Resistance:
You can use the percentage as-is, or just subsitute the 5E standard magic resistance. I do the latter (easier) but either method is fine. Feel free to beef up resistances and immunities on the creature if it looks like it could use some.

10. Converting "hit only by magic weapons:"
In 5E this is always resistance against normal damage, but silvered/magic weapons bypass.

11. Level Drain
Convert that into 5E's "reduced hit point maximum" rule with Save DCs vs. constitution.

12. Movement:
Divide by 4 and multiply that result by 10 feet for movement.

13. Everything Else:
When you're done, you might see something that makes less sense in 5E without it. For example, MR is a big deal in S&W Complete, but not as much in 5E....a lot of creatures that used to be highly magic resistant now express that through additional resistance/immunity in 5E, so feel free to beef defenses up if needed.

12. Pulling it All Together: The Cheat Sheet
Here's my "preferred list" cheat sheet for conversion. Print it out and stick it inside Monstrosities and Tome of Horrors Complete....congratulation, you've just doubled (or tripled) your monster options for 5E.

THE QUICK AND DIRTY S&W to 5E CONVERSION CHEAT SHEET:

Here's a link to the Cheat Sheet

Challenge Rating
Now, calculating the CR....this is obviously easy enough to do with the final conversion averages, using the rules on page 274-277 of the DMG, and good to try out since it will give you an idea of what converted S&W monsters look like in 5E under this method. If you are rushed (doing a conversion on the fly) but use the cheat sheet version above, just look up CR by hit die and call it a day. 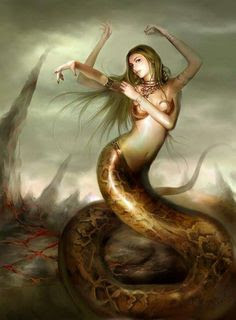 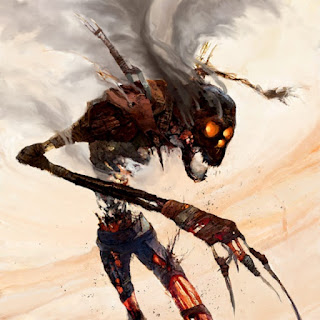 Cinder Ghoul (Tome of Horrors Complete S&W version, Page 270)
Chaotic Evil medium undead
CR 5 (1,800 XP)
Hit Points: 54
Init Mod: +2
Defenses:
Armor Class: 15
Immunity: necrotic, fire, psychic, poison, disease, does not breathe
Saves: +2 to all
Attacks:
Slam +6 to hit  foot reach, 1 target) 1D8+6 necrotic damage plus 1D6+6 fire damage plus target must make a Save DC 14 vs. Constitution or it's hit point maximum is reduced by the necrotic damage dealt and can't be regained until after a successful save at the end of a long rest. If the target is reduced to 0 HP on its maximum it dies (and probably comes back as a cinder ghoul).
Movement: 30 feet flying
This ghost-like monster of ashes and charred body parts is a terror to behold.

(Conversion Note: the ToH stat block doesn't mention fire immunity but...come on, it's gotta have it; the rest are implied for 5E undead immunities)