For my final entry in the "2 hour reviews" theme of Steam's Summer Sale I present a classic space marine FPS, a open-world crafting game/dinosaur feeding simulator, and a high school simulator. How did they stack up in the "try it for less than 2 hours and if you don't like it get a full refund" category?

Speaking of refunds, my first refunds from the initial test work. All praise St. Newell. 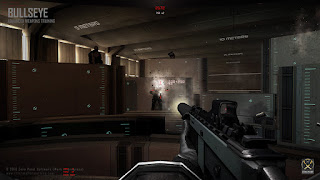 Interstellar Marines: I've seen this one sitting on Steam for a long time now, always in early access. For about $4 I decided I could afford to overlook the early access brand (again) and risk trying it out. Interstellar Marines is basically a "small budget" operation now with a handful of developers, but ten years ago this game would have been a AAA title. Graphically it looks fine...kind of looks like it was built on the Source engine (maybe it was?) and it has a number of solo missions that I explored. If you like space marine type FPS games this is really a no-brainer. It has co-op and multi player modes, too....I haven't found time to explore those yet (I assume it will be hard to find other players, as is typical for most small-budget MP experiences) but the solo missions were well worth the $4 price tag. For a budget early access title that at least one unhappy reviewer suggested has been in actual development for over a decade now, it's not bad. 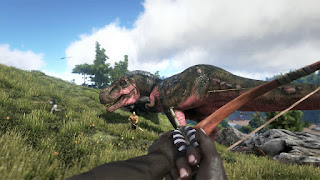 Ark: Survival Evolved: I finally bought this because my wife and her cohorts online have been playing this game non-stop for weeks. She has a very nice rig that she got for Xmas last year and the game seems to chug along on high settings, but looks gorgeous. From watching her play it appears the game is entirely about punching and then befriending and ultimately riding dinosaurs. When you are not doing that you are making a house and a bed and hoping that no one comes in when you are "sleeping" (offline) and drags you down to the lake to feed a mosasaur. Apparently they can't kill you, but they can move you to a spot where a feral dinosaur will...first case of passive aggressive PVP I've ever experienced.

Unfortunately my attempt to play was thwarted by the fact that despite the low minimum specs my no-longer-cutting-edge PC didn't like the game. On high graphics it chugged with a terrible frame-rate and would freeze and crash. Dumbing it down to the lowest setting made it work very slightly better, but it now looked like my monitor was slathered in vaseline. I tried a pve server  that had room for 3 people left but when I logged on all I could find were tamed dinosaurs and other beasts (even a giant scorpion and a shark) with saddles, huge thatch mansions and not a damn thing to do. The dinosaurs just stood around doing nothing, even the spinosaurus and t-rex stood stock still....were they tamed? Were there special rules on this server I didn't grokk? No idea. So I left and started a private game, which opened with dodos on a beach. Then the game crashed...and crashed again....and again....and I gave up.

I guess I'm a snob for frame rates, need at lest 5-10 to make it all playable. That said....my wife LOVES this game, but she admits it still needs work, and it has glitches, including dinosaur physics death animations that exceed the flying dead bears of Skyrim. 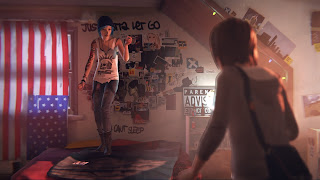 Life is Strange: I have barely scratched the surface of this time traveler/high school sim. Actually it seems to be some community college or special school for gifted students or something, as there are dorms, despite the overbearing principal. The story opens on Max, a girl who's having some out-of-time experiences, and discovers she has the ability to rewind time. This comes fortuitously in time to save another girl's life, and also seems to presage a future event involving her death and the mother of all water funnels.

Life is Strange was made episodically, but all 5 episodes are out. I'm looking forward to playing more of this; it's a 3rd-person behind the shoulder perspective, one part exploration game (ala Resident Evil) and one part classic adventure (point and click without the point and click). Graphically polished with top-notch voice acting and storytelling. I really want to see where the plot goes.

Intersteller Marines: if you get it for $5 or less you won't be disappointed. It's a fun FPS that ten years ago could have looked like a legitimate competition for bigger fish like Halo.

Ark: Survival Evolved: my wife loves it, her friends love it, I can't run it for crap. Refund requested, but if you have a smoking not rig and a freaky dinosaur taming fetish you may want to try it out.

Life is Strange: excellent adventure/mystery in third-person view format about a young woman with time traveling abilities, definitely keeping it.

Oh, still playing Infestation: Survivor Stories but I'm getting annoyed at the fact that I can't find any further purpose outside of exploring the vast and empty world. I did find a grave site of another player, apparently killed by some other player. Yeesh.