A new entry from the forthcoming Realms of Chirak...this time, animate worker drones: 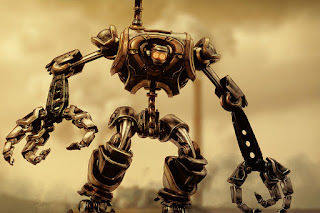 Animate Worker Drone
CR 3 (700 XP)
LN medium living construct
Initiative +0
DEFENSE
AC 14 (natural armor)
HP 60 (8D8+24)
Resistance: fire, lightning
Immunity: poison, disease
OFFENSE
Speed 30 feet
Multiattack the worker drone can strike with two fist attacks per action.
Melee Attack - Fist +6 to hit, reach 5 ft, one target, hit 2D8+4 bludgeoning damage
Statistics
STR 18 (+4), DEX 10 (0), CON 16 (+3), INT 10 (0), WIS 10 (0), CHA 6 (-2)
Languages: Logos, Old Mythric, 25% chance of tradespeak or other
Senses: darkvision, perception +0 (passive 10)
Skills: Athletics +6
TRAITS
Living Construct. The animate worker drone is a living construct, and does not need to eat, breathe or sleep, though an animate with spell casting ability will need to meditate. Animates are immune to poison and disease. Living contructs do have an animating spirit, however, and intelligence. As such they are not resistant to mind altering effects,
Lightning Slowness. Animates are reduced to half moving speed for one round when struck by lightning, and in that round they cannot take bonus actions or reactions.
Elemental Imbuement (fire): animates may imbue themselves with resistance to one elemental type. The sample worker drone is imbued with fire, but this can vary among any of the elemental types.

Animate workers are usually found deep in the belly of animate cities such as Beltraine. These gangly, lean mechanicals are comprised mostly of clockwork mechanisms, rubbery joints, wooden slat carapaces and streams of flowing, radiant elemental energy. The type of energy is usually a giveaway as to the nature of their driving elemental force. They rarely seem to have much intelligence to their actions, instead following whatever obscure programming they have been direct to carry out.
Worker drones that somehow get loose or find themselves lost in the surface world of squishy biologicals often have mental breakdowns, being unable to properly process the data they experience. As such they are rarely deliberately seen outside of actual animate communities, and those few that wander the land tend to act very strangely, almost insane (and sometimes even become chaotic neutral in behavior permanently).

Flyers
Some worker drones are equipped with metal wings and steering columns hooked up to rudders allowing lift and guidance in flight. These drones have flight speeds of 60 feet, and work on the delicate spires of the Animate cities. They also work with four clawed limbs instead of a humanoid form, adding a claw attack option:

Multiattack: flyers can attack up to four times with claws against targets in range with one action.
Melee Attack – Claw +6 (5 foot reach, 1 target) 2D8+4 slashing damage and target must make a DC 10 save or is grabbed by the flyer.

Diggers
Certain worker drones are designed to dig deep into the earth to forge new passage ways and excavate for new material resources. They have tremorsense and can move with a burrowing speed of 30 feet. Their drill is an additional attack:

Multiattack: the digger may strike with two fists or one fist and a drill.


Melee Attack - Digger Drill +6 attack (reach 10 feet up to 2 targets), 4D8+4 piercing and slashing damage and target is knocked prone.
Posted by Doctor Futurity at 6:00 AM