My wife and I saw Jurassic World tonight....yes it was indeed a great movie, and a worthy sequel to the original. It helped a lot that Starlord was one of the lead characters; honestly, if Chris Pratt hadn't done Guardians of the Galaxy last year this movie might have felt more like a "good, fun summer flick" which it definitely was....but Chris Pratt's mere presence in the film post-GotG elevated it to something that benefits from what has come before.

Chris Pratt may, I theorize, do for summer blockbusters what "Cabin in the Woods" did for horrible B-horror movies: he makes it better by having established a sort of "metaspace" for his presence in the film. This was a film about Starlord after he decided to spend a year or two on earth to recover from the profound effect of channeling an infinity stone's power (so he's a little grumpy). And of course this is the Marvel Earth so it makes perfect sense that we've had twenty years of dinosaurs off Costa Rica and a massive park so successful people are actually getting tired of ordinary dinosaurs. And InGen is actually a front for AIM or Hydra.

Ignore those cockamamie people with their theory that Pratt's character is just the kid from Jurassic Park I all grown up. My head cannon is much better!!! 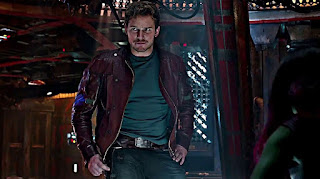 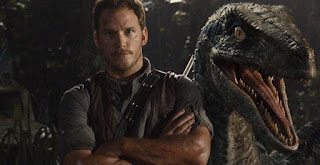 Only Starlord would be completely unphased by working with velociraptors.
Posted by Doctor Futurity at 12:05 AM