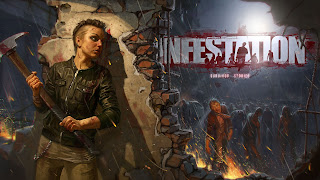 I try not to buy "early access" titles on Steam but every now and then I succumb to the appearance of a great game and the overt love that some reviewers seem to exhibit for these alpha and beta releases. If you hang out on Steam at all you probably have noticed that there's an enormous number of early access zombie/post-apocalypse/medieval/dinosaur crafting games with open world sandbox premises. The one thing you can be sure about all of these games with almost no exception is:

1. Their promotional videos will always look better than the actual game
2. There's almost never anything remotely resembling a storyline; these games depend on your personal motivation and the actions of your fellow players as "being" the storyline
3. No matter what you paid you will probably wish you hadn't

But the good news is: Steam is now offering refunds on games that you have played for less than 2 hours and owned less than 2 weeks. Huzzah!

So with that in mind, I decided to check out a few of these games and apply the "2 hours test" to them. I've already tried a few others in the past, including Nether (which actually is gorgeous and has some freaky monsters in it, but is otherwise a slog through sociopathic pvp land with no real story or meaningful questing going on) and 7 Days to Die which was a particularly egregious example of "video is better than the game." Try as I might I couldn't get anywhere in 7 Days to Die, but some people seem to really love it.

So this time I loaded up Infestation: Survivor Stories (which has a legacy reputation for being hideous, so at $1.98 I decided I was willing to risk it now), as well as the on-sale H1Z1, Survival: Postapocalypse Now, and Survarium. My brief experiences so far:

H1Z1: the gloomy pictures of zombies in a fog-shrouded woodland as you approach with an old axe to take them out was contrasted with bring dropped in a bright, flowery sunny day in what felt like Colorado somewhere. I wandered around looking at old cars and farmland, avoided a wolf that appeared to not care I existed, and avoided other players until I remembered I had chosen a pve server. Never found anything interesting except a map, never saw any zombies. Did see a guy driving a car which was cool. Grew bored and left. Refund requested.

Survarium: this is actually a F2P with a rep for having in-game "pay to win" purchases. Allegedly it's like Stalker if it had been turned into an MMO of some sort. I got to the character screen and opening window for the first arena game....and nothing happened. It couldn't find players, or connect, or something. So uninstalled, moved on.

Survival: Postapocalypse Now: this was the most interesting experience, and I would have kept on except for what happened after I starved to death. First off, the ambiance in the game is pretty decent; I was immediately interested in exploring this world, which is not filled with zombies at all....apparently other players get to be the threatening element. At one point someone started talking to me..."hey dude" but I ran off....he had a torch, and near as I could tell this game is 100% pvp friendly. It turns out that this was a good hunch....as my poor character staggered off into the wintry night to starve and freeze to death (he did), it turns out while you are waiting for the character to reload you can see what other players are doing. It turns out the guys with torches were collectively ganking new players left and right. Sigh. Uninstall and refund requested. I don't have time for this kind of nonsense.

Infestation: Survivor Stories: this game, if you don't know the history, came out about three years ago and was called The War Z. It earned an early reputation for having all sorts of problems, including poor development, bugs, hackers, ban-happy developers and who knows what. There are very, very bitter people still out there harping on this game. They changed the title at one point to move away from the stigma that The War Z evoked, and ever since it seems to have become a more stable game experience...although YMMV.

My play experience so far was better than all the negative press led me to believe it would be. I had a guy, and there was a town, apparently devoid of other players but full of zombies. The town had loads of random weapons, food, drink and armor lying around. You could enter most residential homes but only a few businesses. You could avoid attracting zombie attention, for the most part, but when you did they usually went down with a hit or two from a rifle or pistol. Oddly I found that melee weapons seemed worse than useless, and could end up hitting a zombie a hundred times before it dropped.

After a while I began to wonder what else there was to do besides collect stuff and tempt fate. There are some quests....and reading online suggests the quests can be more complicated than what I initially found which were things like "kill 20 zombies with your bare fists" type stuff....no thanks.

I:SS seems to lack much direction as many of these other games do, as the designers seem to focus on the sandbox and experience at the expense of providing any sort of structure, leaning entirely on the players to fill that role. Some people love that freedom an despise any sort of story, I guess....but I sort of like to have a reason to play these days....I'm too old to think that surviving for 100 hours in a zombie game actually counts for anything in the grand scheme of things, and if the game doesn't help establish a sense of purpose and motivation...or at least clearly outline the tools by which you can forge your destiny....then it's not my cup of tea. I:SS may yet do this, and I plan to play more, because of the various titles I did play it was the only one that actually had some action in it...plus at the current sale price of $1.98 I'm okay with it being a disappointment if I am past the 2 hour mark and can't get a refund.

So how do they stack up to the 2-Hour Gameplay Test?
H1Z1: too boring and directionless but I'll check this out when it's a completed product out of beta. Uninstalled, refund requested.
Survivor: Apocalypse Now: excellent starvation simulator and needs pve server option for wimps like me. Uninstalled, refund requested.
Survarium: didn't work, not sure why, cost nothing, just uninstalled.
Infestation: Survivor Stories: worth $2 or less for sure and hooked me enough with some actual gameplay involving shooting and zombies to want to try it again. Keeping this one.
And prior games in the genre I previously picked up:
Nether: gorgeous game, I would have kept this for the environment even though there is precious little to do and pvp involves fearing fellow man more than the scary nether monsters.
7 Days to Die: more like seven minutes to uninstall! Bam.

For now, the winner of this contest is Infestation: Survivor Stories, being worth the $1.98 I spent to keep. I did not expect that, I must admit....just trawl through the Steam forums sometime to get a real sense of how much ire this game has caused. Then again....check out any of the forums on these games...i.e. Survivor: Postapocalypse Now, for example.....yeah, sometimes its safe to assume the forums attract lots of angry people and are a "non-representative sampling" of interested players....but another way to think of it is like this: if enough people are pissed off that they go spend effort on the forums to complain, imagine how many people were just generally unhappy about the game but simply walked away from it after an uninstall?

I'll let you know how long it takes Steam to refund games. The money goes into your Steam wallet, as I understand it.
Posted by Doctor Futurity at 6:00 AM