Ken St. Andre reports that the Deluxe Tunnels & Trolls rules are almost done and ready to go to print. He also provides the final cover image, which as expected is a gorgeous cover by Liz Danforth. Per Ken, there's some final insertions of copyright notices on art, and then in theory it's ready to go to press.

It's been a long wait (the Kickstarter is a little over two years past due), but the hardcore fans of T&T are about to get a fantastic treat, I think. As someone who has been personally tied to T&T for many decades, and who knows and trusts all of the parties involved,* it has been an interesting experience to see how a Kickstarter can be a blessing and a boon to creative professionals. There are times, I admit, that I have regretted backing it and other Kickstarters, because it is so much easier to just plunk down some cash at the end of the road for a finished product.....but the personal stake in saying, "I am a fan of this game and I want it to happen" is just as exciting in its own way....and honestly T&T is the only game I really love being designed by the only people I have always felt this much confidence in. As such...I am really looking forward to at last getting DT&T and the copious quantities of additional reprint/revised books I ordered soon. This may inspire me to start writing about T&T again, as well. 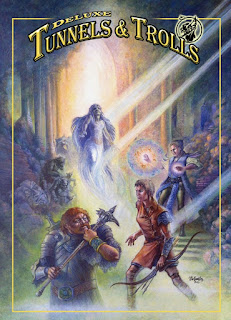 *For most RPGers in the early 80's Gygax and crew were the Big Deal. For T&T fans it was Ken, Liz, Scott, Rick, Mike and co....and especially if you lived in Arizona as I did.
Posted by Doctor Futurity at 12:30 PM