I was reading a thread over at rpg.net about magic item economies. If you know rpg.net then you also know it's sort of the cool place to bash 5E, albeit with a lot less effort and energy than the old edition war days. Some of this is because most of the remaining 4E fans of that edition still linger at rpg.net, and they have some old grudges against the way WotC cavalierly speared their edition through the heart and roasted it over 5E's birthing fire. That said, I had some comments about 5E's magic item economy I thought I'd share here, for fun: 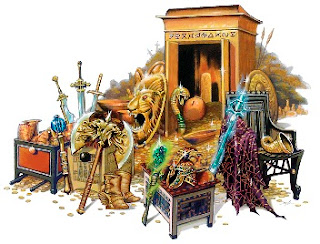 So far in practice, after I got over the initial shock/hump of resetting my perceptions from the magic item economy of Pathfinder and 4E to the 5E methodology, I am extremely content. From a verisimilitude perspective the costs of magic (which are defined in terms of creation, selling and even purchasing albeit with a lot of emphasis on the GM deciding on how inexact the market is) are useful in identifying the fact that gold is also devalued in 5E....or more accurately less gold goes farther, and its an important element of the whole game economy. I say game economy because clearly D&D does not (and never has) done actual mirroring of a fantasy economy very well; it does just enough to make the game playable....but no edition to date will hold up under scrutiny without making a lot of special assumptions (one of which* is very safely that not only are adventurers the only ones who regularly find magic, they may be the only "adventurers" in your campaign to find magic at that moment, too.)

In actual play my players have figured out that any item they seek to make has a cost and a quest attached. This is fodder for future games, but has only been acted on a few times now. They've also figured out that selling a magic item is a bigger deal than just selling regular stuff; they don't just dispose of a magic item of note, they need to find a buyer with the money, and the haggling rules in the DMG facilitate that process. In one game I let players have some say (4E style) on what they found in a loot horde. It was a HUGE mistake as it turns out. 5E does not work well with "player agency" in loot acquisition like 4E did (I'm eyeballing that Staff of the Magi you've got Jeff!!!)

As GM, being able to assert that there is no local magic item economy (except if the players dig hard to find someone locally who might have a lone item or two to sell, or at best a potion or scroll shop run by the local mage's guild) has been not just liberating but shockingly effective at removing what has long been a Big White Elephant in the room for the last 15 years of 3rd edition: the demystification of magic items as a unique treasure, instead being treated as a commodity that you buy and sell like anything else. Now they are rare, valuable, and not something you can just buy....even if you do sell them; and so valuable that just like other exceedingly rare and covetous items in the market today, once you've sold it the chances of getting it back are insidiously hard.

The magic item selling rules on page 130 in the DMG really encourage the thought that the "base price" in the book is a mechanical base price.....that the actual price of magic in value is less than the stated price on average, and only occasionally worth more. I'm no economist (it should be obvious) but to me this helps emphasize that in 5E a little gold goes a lot further than it does in prior editions. It also suggests that if selling magic items is happening a lot in your game (which lower value seems to me is a way to discourage such.....or at least prevent the sale of such from being a means of gaining quick cash) then maybe you're handing them out too often.

Items selling at a devalued worth is contradictory to items being rare and coveted enough that no market exists because they are "too valuable" to those who own them. It implies an entirely different market out there: pawns. I think back to my youth when after my first marriage ended I needed money and went to pawn my wedding ring. It was worth (by sale price) like $1000 but the pawn shop offered me $30. Wake-up call on gold value in jewelry! Maybe the devaluing of magic items comes from the fact that since no one in 5E land knows the average value of such items...or their use....then the sale of such goods is severely devalued? Or just as likely even if they are known to have value, no one actually has much coin (a shockingly realistic moment in D&D coinage and economics, I admit) to buy them with, such that the only sales of such rarities always come from suspicious fellows, noblemen with money to burn and weird wizards who'd rather get you to quest for them anyway?

Imagine if attunement was only possible for characters with a level in a class, or some training? Not in the rules, but it makes sense to me that average merchants and commoners would lack this talent to use such items, rending them mostly ordinary.

Heck, imagine if every time you attuned to an item there was a 5% chance the item lost its power? And that increased by 5% each time it was re-attuned. Not a 5E rule, but it would really clarify why magic item trading and selling was rare.

For that matter: the 3 item attunement limit really does put a crimp on use and need, anyway. Think for a moment what our world would be like if each person was assigned exactly 3 power sockets for their entire life, and power-strips/surge protectors did not exist. We'd save money, that's for sure....and the competition of the market to get you to buy their amazing all-in-one appliance would be great, I imagine.

If you look at the starting equipment at different levels of play (and magic) in a campaign on the DMG, page 38 it's interesting to note that a 17th to 20th level character in a standard campaign has only 2 uncommon magic items and 1 rare magic item. That's pretty stingy by...say...Pathfinder rules. Even with the starting GP it is unlikely that the PC could afford another rare item if the GM allowed the purchase of such. This tells me that in 5E's realms where characters can only attune to 3 items, it is entirely possible that you could adventure for 20 levels and only ever find 2-3 items to attune to....and possibly never even find opportunity to swap out. That's extremely different from 3.5/PF assumptions which had a mechanically forced magic-item churn economy.

*two others would be: clear rules and guidelines on how and when magic items lose their power, and the most important of all: how many magic items are actually out there, and how many actual artificers are there? Set these sliders really high and you have Eberron. Set them really low and you have what I think is standard for 5E now.
Posted by Doctor Futurity at 6:00 AM