I did not know that there was more than one Metamorphosis Alpha in the works. In addition to the pricey but faithful reprinting of the original at Goodman Games, apparently Signal Fire Studios has a new edition of the game out now in PDF, with a print pre-order available.

I got into RPGs with Gamma World first, and never did get to experience the original Metamorphosis Alpha except posthumously. Later around 1991 or 1992 TSR released their Amazing Engine system with a Metamorphosis Alpha to Omega setting, and I ran a lengthy, amazing campaign.

Anyway, I just ordered it and will try to do a "walk though the rules" ASAP. Finding this today is like walking down the street when a  $100 bill floats by. 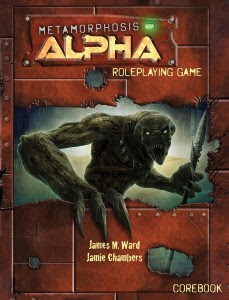 Tim Snyder points out on G+ that this actually started as a Kickstarter 3 years ago and is only now coming to fruition....thanks for that detail. Yet another case against backing Kickstarters....this one shows an original release date of September 2012!!! I knew of the Goodman Games Kickstarter but not this one. Yowza.

Still, I'm glad the game is here....and REALLY GLAD I didn't back it eons ago.
Posted by Doctor Futurity at 2:00 PM