A look at Iron Falcon 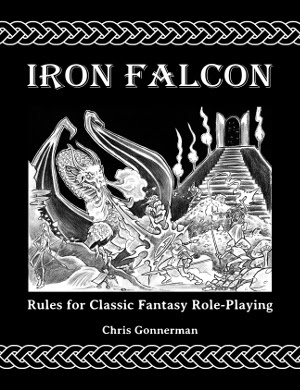 Iron Falcon comes from Chris Gonnerman of Basic Fantasy fame, but unlike Basic Fantasy which focuses on an extremely OSR-themed rules-lite version of the D20 system, Iron Falcon is a pure retroclone in the finest sense, aimed at a very specific slice of D&D time: that period during which there were three little brown books plus one supplement (Greyhawk). As such it is occupying similar conceptual space to the Swords & Wizardry game, especially the Whitebox edition.

Before I go any further, let me point out that Iron Falcon is free in PDF format right here. As is traditional for the Basic Fantasy Project offerings the book can be purchased in a very inexpensive (at cost) print copy, or a more expensive hard cover. I've ordered the softcover myself....I am not sure I'll use Iron Falcon for actual gaming on its own, but I may use it as a supplement to planned S&W games. But who knows--I could also use Iron Falcon as the core rules and lean on S&W Complete for the "expanded content" of the later supplements.  It's a nice, complete package in and of itself, so a cheap portable copy of a 1975 0E-era retroclone seems rather useful to have around.

Since you can download it for yourself, I'll avoid going into too much detail, but Iron Falcon does distinguish itself from S&W as follows:

It has the four core classes (fighter, magic user, cleric, thief) with the thief from Greyhawk

Paladin is an option in the back appendix

No demons (those didn't appear until later supplements)

Some rules on trading out ability points to boost prime requisites (not sure if this was in the LBB set or not, memory fails)

Medium and Large size damage expressions for weapons, and optional rules on bringing back the weapon vs. armor type modifiers

Unlike S&W Complete, since Iron Falcon  strictly limits the scope to the 3 LBBs plus Greyhawk, we don't get a lot of optional or variant rules. Initiative, for example, is the group D6 roll option only since other later options appeared in other supplements

What's cool about all of this is that Iron Falcon (much like the core and whitebox editions of S&W) really hammers home how complete the original D&D was, and does a great job of revising and cleaning up the original into a compelling, playable package. It's also got a few advantages, depending on your personal taste: for one, it's written in a very clean, neutral tone....if you prefer a version of 0E that give you the rules without making any assumptions about how to play, this is a great edition for you to look at. It also is very concise....this edition, despite being branded as "not for beginners" by Chris is in fact actually a great starting point for new players (with the caveat that Basic Fantasy is, admittedly, the best starting point).

Downsides include a lack of art....as in no art. Also, since it only covers the first supplement of D&D it is missing the later content. Personally I'm going to hope that Chris follow up with an Iron Falcon sequel that brings the other supplements in to the fold....that would be ideal. But make no mistake...this game is a complete package, and has everything you could possibly want to start gaming like it was 1975. If your not burned out on retroclones yet, you should check it out.
Posted by Doctor Futurity at 6:00 AM