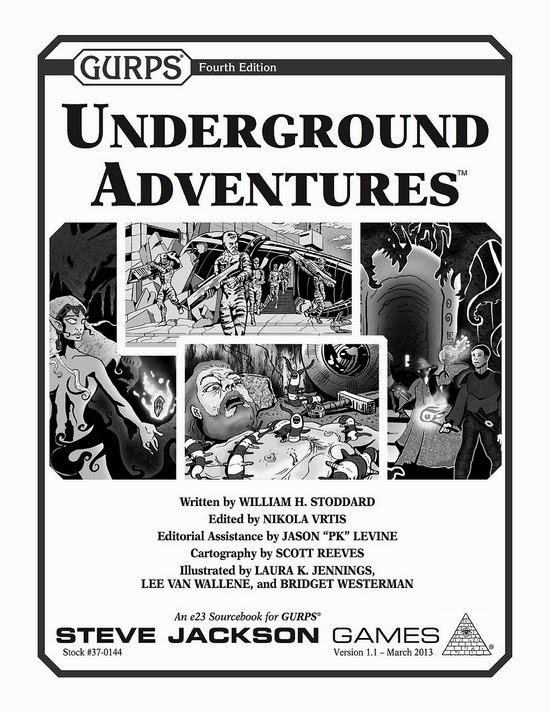 Underground Adventures is one of the many short PDF sourcebooks released for GURPS 4th Edition since Steve Jackson Games moved to an almost exclsuively PDF model for supporting the game through their e23 site. The supplement is 37 pages, prints out easily for those (like myself) who prefer to read game books in print over PDF, and is written by William Stoddard,  a noted GURPS author who has contributed to many other fine GURPS tomes.

A lot of gamers know of GURPS as the game that you can buy and read the sourcebooks for with the intent of borrowing them for use with other games. Since 4th Edition GURPS came out this has been ever so slightly skewed; few of the 3rd edition books got a proper 4E reprint (for reasons too laborious to bother discussing here) and many of the 4E books now released skew a bit heavy on the mechanical design side, a side-effect of the way 4E repackaged itself, I suppose.

Underground Adventures is a GURPS tome focusing on exploring the subterranean realms of Earth, or places much like it. As with most GURPS supplements the appeal is in the focus on real world myth, history, esoteric lore and how one can derive ideas from it to enhance your own games or create something with a firm root in real-world origins. In this case the subject is on a historic and mythic perspective on the underworld, how it came to be, what it is comprised of, and how that knowledge changed over time until our scientific understanding eventually took over. From there it's all about the tools and means of exploring the depths of the earth.

One thing this book is not is a proper an detailed manual on spelunking. I'm no professional spelunker, but I've known a few and I think they would have been disappointed that a book professing to be about underground adventuring did not also include some meaty details on cave systems and how to navigate them. For GURPS, a system known for its tendency to expound at great length on technical bits like this, it seems like a weird oversight.

The book is broken into five chapters. Chapter one discusses the old world myth and history of the underground, from the stories of Tiamat and Ymir (along with amusing and useless stats on the world giant) to the views of natural philosophy and at last the modern geological understanding of the earth. This is all fit into about six pages, so geologists and mythographers alike may be a bit disappointed at this broad overview, but for casual gamers looking for ideas there are a few to be had.

Chapter two is "Tight Places" and discusses the mechanics of navigating through the underground. Most of this is just factual discussion of the process, and the rules bits while useful to GURPS players are easily ignored or extrapolated by gamers using other systems. There are about five pages in total; this is where I might have expected a bit more depth on the art of spelunking, but for most non-spelunkers the content will be more than sufficient.

In chapter three we look at explorers of the underground, including five templates and a bunch of advantages, disadvantages and other notes relevant specifcially to GURPS. Templates include the caver, cthonomoancer, geologist, lurker and miner. There are about eight pages on character options, and this is all pretty specific to GURPS so will be of limited use to gamers using other systems.

Following you will find four more pages on equipment, which is more broadly useful, and a bit of discussion on the specific gear and items which would benefit the modern or archaic traveler in the underground. Most of the entries refer to High Tech or Low Tech, two other GURPS supplements, so the best material is on the new scientific equipment discussed, including seismic instruments, drills and samples, methods of detecting exterior fields and deep imaging systems. Some bits on dowsing rods followed by vehicles (the nuclear subterrene, tunnel-boring machine and segmentary burrowing vehicle) top it off.

Chapter four has four pages on dwellers in the darkness, including the speleid (cave nymphs), living fossils such as gryphons and zwerg (cave neanderthals), scuttlers (cave centipedes), nightfolk (sort of like derro but not referenced as such) and crystalloid extremophiles. A smattering of monstrous ideas, hinting at many not addressed.

Chapter five concludes with three pages on adventures underground, touching on caves, hidden underground sites, excavations, and a few brief campaign seeds. After this we get an appendix with recommended reading that is probably the most useful portion of the book for those who were looking for more meat on the subject. Following that is an index, because SJGames books are always properly indexed, a rarity in this industry.

Overall it was a brief and fun read, with a few cool ideas, but I suppose this would have to have been a much larger book to accomplish the depth I would have liked. For $7.99 I am not sure I can really suggest it to any but those who specifically would like some supplemental material for their GURPS games, which is a shame because the core conceit of this book has so much potential for further exploration. 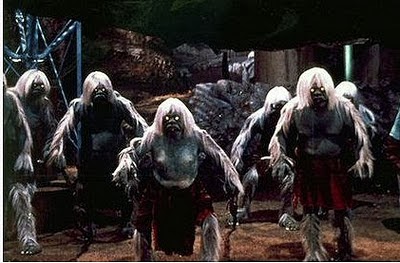