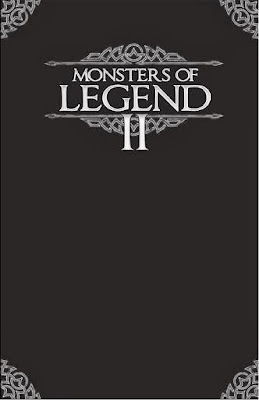 I finally picked up the PDF edition of Mongoose publishing's Monsters of Legend II. Last year was both great and terrible for BRP/D100 system players: it was a year with Runequest 6, Legend, Magic World, BRP, and Open Quest 2, not to mention the inception of the (late, of course) Call of Cthulhu 7th edition Kickstarter. There has literally never been a better time to be a fan of the overarching game system under which all these games loosely fit. The terrible part is the same problem: too much stuff! Decision paralysis over which iteration of the game to play can be a terrible burden, something D100 fans are not used to.

One of the perks of the BRP/D100 mechanic is that it's very consistent in its basic terminology; every version of the game to date uses the same array of stats and percentile skill system, and most of the tweaks boil down to how skill rolls are handled and combat is resolved. As a result, you can almost universally port any stat block from one edition of the game into another with minimal fuss, just tweaking the stat block by adding or deleting the specific set of info you need to make it work for whichever ruleset you're working with.

Because of this: Monsters of Legend II isn't just a useful monster resource for Mongoose's OGL-based Legend rules system, it's also a useful book for Runequest 6, BRP, Magic World and perhaps even Open Quest 2 (the only version of the game I don't currently own, although I plan to rectify that).

Monsters of Legend II is a 183 page sourcebook of new monsters for Legend. The format of the entries is fairly straight forward: each monster gets a page or more of background details and description, a one page stat block, and many entries then get one page for an illustration. The book includes details on 61 new monsters, as well as some discussion on creatures of the planes,a concept new to Legend (and BRP) as presented here.

A note about the art: Mongoose has a pretty large portfolio of stock art to choose from, but so far as I can tell all the art in this book is new. It ranges from average to pretty good; none of it is quite as good as the Runequest 6 art, but the book's got its own distinct look and the black and white line art will be very comfortable to old school gamers. In sharp contrast with some prior MGP products I did not detect any gratuitious pulchitrude, anywhere. Shocking!!!!

The monsters in this book are all new to Legend (although I think a couple may have previously appeared in some other tomes, such as Necromancy for RQII; others may have come from D20 resources, but I could not say for sure), and fill in some distinct flavor for the system, which right now has the distinction of being extremely generic in presentation, allowing GMs to make of the game what they want. If you're interested in a medley of weird undead, strange planar creatures, some odd fey and an occasional dungeon denizen MoL II has much to offer. Here's a quick run-down on what the book provides:

Amber Animals - creatures fused with the spirits of animals and plants made from amber.

Anachra - this includes several subtypes; Anachra are planar guardian servitors, and bear a slight resemblance to archons and other beings from D20. One gets the impression they are the equivalent of seraphs or angels, as they are aligned against evil, but the array is fairly diverse, with a cat anarchon, chain anarchons (chain-fighting butt-kickers for freedom), hammer anarchons (purveyors of conflict), herald anarchons (sort of a race of Hermes/Mercury types), storm anachrons (embodiment of righteous fury). The only negative here is that the text uses both anachra and anarchons as plural forms.

Barrow Trolls - bigger, nastier trolls with an aspect of death about them, now with 100% less Glorantha in them.

Bladeleaf - evil fae pixies that are very "unseelie" and autumn-aspected. Utilize toxins and spells conjuring a storm of razor sharp leaves. I like 'em.

Bonecracker Ogres - if you thought the conventional Runequest ogre was a wimpy doppelganger, and the generic Legend ogre just a big orc, then these guys are right up your alley.

Candleman - these chaos beasts are really cool, men made of wax, whose burning flame represents their trickling life force.

Citywarden - the living embodiment or spiritual guardian of a old city. This is a cool concept, somewhere between "humongous poltergeist" and "city golem" in its execution, a protective spirit which protects its ancient living city.

Dissolute - if you are slain by an ooze while tainted this is what happens to you. Sort of the Legend stat version of the freaky zombies from the end of Planet Terror.

Dungeon Stalker - freaky ceature which was, if the legends are to be believed, formed from the oldest era of adventurers who delved deep into the earth, but were unable to return to the surface. They...changed....and now they hunt. Particularly enjoyable is the text description of their appearance vs. the picture, which both evoke a strong sense of "what the holy crap is that?!?!?"

Emergents - these planar elementals are a more conventional non-Gloranthoid version of elemental beings, including all four elements.

Eyeless - creepy otherworldly humanoids with dark sockets where the eyes should be. They have a haunting presence and can steal the eyes of their victims. The background on these monsters is very evocative; it makes me want to run a campaign with eyeless as a key foe asap.

Flaygaunt - flesh-flaying ghoulish humanoid carrion eaters,with a great illustration attached. They are reminiscent of the weird flesh-devouring beasts from the movie Beast Master, crossed with a cenobyte. Another favorite of mine in this book.

Harpooner - the Legend version of the piercer!

Headless Screamer - the hideous cross between the Headless Horseman and a fast zombie, these are some nasty variant undead that shake up the formula a bit, with hideous screams and head-tossing goodness mixed in.

Hearthfire Elemental - a variant on the kitchen god concept, an elemental that has taken residence in a home stove, hearth or fireplace. This, along with the citywarden, are examples of a special kind of grief monster, I believe, which depends on games like Legend/Runequest with stronger thematic ties to village/town/city raiding as a Thing adventurers sometimes do when they get all horde-like on the campaign.

Lighting Elementals - exactly what you would think.

Mesmeric Specrtre - a domination-themed ghost which has bargained with its afterlife tormentors to be allowed freedom for a short time to harvest more souls for them. One of the better illustrations in the book, too. 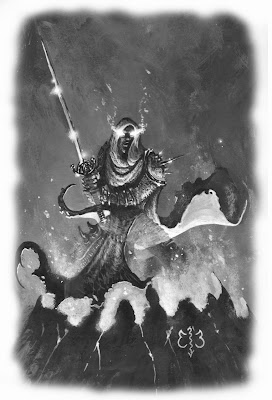 Mirror Ghost - a hideous spirit bound into a mirror which is shattered the moment it commits suicide. Lots of glass shard attacks as a theme.

Oakstumps - stout little fey who are fond of lumberjacks and forest-trimming.

Parched Zombies - formed from those who died of thirst while wandering the desert these zombies can steal the moisture from their prey.

Platinum Unicorn - a planar unicorn, the platonic ideal of its kind. Designed to kick evil's ass.

Plundering Undead - piratical undead which would be very useful in a Pirates of Legend campaign.

Ragged Wraith - the undead spawned from those who were drawn, quarterered and/or mutilated at death.

Razorfiend - another monster made of pure awesomeness. These hideous planar beings were believed to be demonic constructs that became their own race. They are made entirely of razor edges, and their actual mass exists in another dimension entirely. They are capable of making everything around them sharper. 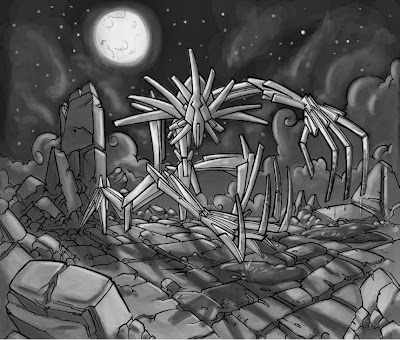 Sanctified Defender - a grief monster, which the GM can use to attack players who trash temples for no good reason.

Sentinels - more cool concepts ahead. The sentinels remind me of the ancient colossi in Shadow of the Colossus (a video game from the PS2 days) merged with the Titans of old. These ancient beings predate all other beings, and are literally the montains and other great monuments of the world. If you are fighting one then your campaign has probably jumped the shark.

Thing in the Lake - that creature in the water before Moria's Gates which tried to eat Frodo and co.

Trash Rat - if you wanted ratkin in Legend, here they are. Trash rats are here for the enjoyment of everyone who ever wanted to play an anthropomorphic rodent.

Unraveller - sometimes known as the "End Boss" these are the antithesis of the sentinels, the creatures at the end of time which will unmake reality. Aside from the awesomeness their concept evokes, they are insanely powerful and aimed at legendary heroes as the sort of epicenter of an entire campaign. Or the ultimate grief monsters, your choice.

Vein - a hideous beast that looks like a mobile venuous circulatory system in action. Lots of blood-drenching powers.

Volcano Giant - that guy the villagers sacrifice virgins to.

Wastedwellers - remote humanoid race that is evoacative of Sand People from Star Wars.

Windwarriors - air elementals who have learned to fight with sword and shield.

Wintersinger -a cold themed undead formed from those who die of frostbite and exposure in the cold.

Wise Hare - okay, I love this one. the wise hares are an anthropomorphic race of sturdy hares, who are ripped straight from the tradition of humanoid animal fiction. The wise hares, however, must survive in the dangerous human-and-monster dominated world of Legend, so they are a bit skittish. Runequest may have it's ducks (well, sort of....RQ6 sort of hid them) but Legend officially has its wise hares.

Withering Cadaver - a creepy half-formed undead that comes about when a more powerful undead's attempted creation fails. It likes to pull the flesh from its prey.

Woodsong - benevolent halfling-like fey with a strong penchant for music integrated with magic. Also the first friendly fey in the book, I think.

Wyrdling - a divine benefactor who seeks out reluctant heroes to give them a "push" in the right direction. A nice roleplay-centric creature.

So overall a nice selection of monsters, and a number of stand-out gems. Regardless of which edition of the BRP/D100 system you play I think you would find this useful, though the easiest versions to use it with will be, of course, Legend and RQ6. The book also has the distinction of making Legend's array of creatures more unique and distinct; the creatures in this book help solidify Legend as its own entity, a universe apart from its forebear. Well worth the time to pick up if you are a fan of monsters, and a fan of D100 systems! 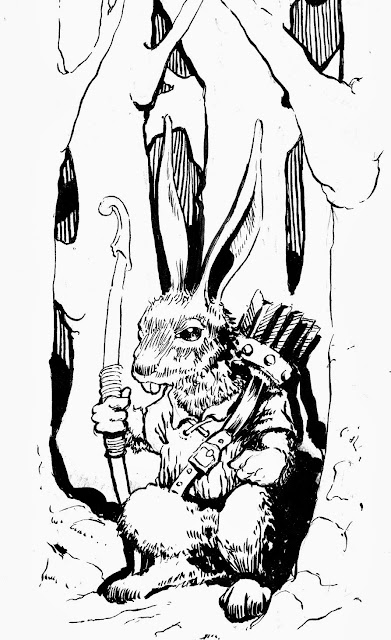 All art in this article is from the MoLII book.

Posted by Doctor Futurity at 10:47 AM