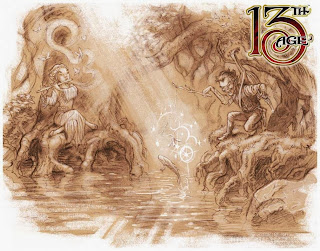 Played 13th Age for the first time since the holiday season descended upon us; the last game was at the end of November, if I recall correctly, so it's been more than a month. This session drew an unanticipated nine players, which I did not expect (I thought I'd have five). A second round of character generation ensued, followed by a skirmish with a party of orcs and dire wolves to get everyone in the spirit of the game's style and mechanics.

It was an interesting session for a few reasons, which were eclipsed by a prolonged combat.

Nine players is a lot to handle for my second session of the game. I can, after three years of Pathfinder and six years of 3.0/3.5 run large groups in D20 without too much trouble....but it was a chore to do so with 13th Age due to the fact that it's relatively new to me. The engagement mechanics were put through the grinder Saturday night; I ended up regretting that we did not use a board to track the action. The whole fight took close to three hours.....something I wished never to see again from the old 4E days, alas.

I don't think 13th Age was the problem, overall, although with groups this large the heftier HP totals in 13th Age stand out in the same way 4E's did. It's got a great set of mechanics for quick play and the players present for the prior session agreed that that game had a lot more going on and moved very smoothly; but nine players, most unfamiliar with the game, was a nightmare for obvious reasons; 13th Age just isn't built for this level of duress.

Debating asking everyone to cap the group at 6 players for next session, but not sure how to go about kicking three players arbitrarily.....everyone in the group is a decent person who I enjoy gaming with, so the sad reality is we've got a "too many players, not enough GM to go around" situation here.