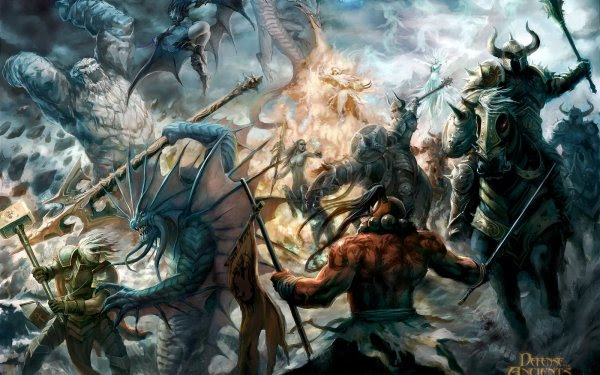 Although written with Ages of Lingusia in mind, the following combat options may work well for any Swords & Wizardry campaign looking to add a bit of extra oomph to battles:

New Combat Rules
Combat is more or less unchanged in Ages of Lingusia, but there are a few new options made available should you wish to apply them.

Two Weapon Fighting
The standard rule of two-weapon fighting presumes a duelist who is gaining a slight edge (+1 damage) on his attacks by using two blades to keep his opponent off balance. There are a couple more options, as follows:

Defensive Duellist: A defensive posture with two weapons may be taken, which instead of granting a +1 damage bonus instead grants a 1 point AC bonus to defense. The off-hand weapon must be a light weapon, usually a dagger.

Double-Striking: A fighter, ranger or assassin may attempt to attack with both weapons, incurring a -2 penalty to the first strike and a -4 penalty to the second strike, but doing damage with each weapon that does land a blow. If the fighter uses an off-hand light weapon that is smaller than his main weapon (such as a dagger or shortsword) then the penalties are -2 and -2 respectively for each attack.

Monks may attempt to dual strike with fists, and rogues may do so as well provided they wield either a dagger and shortsword or two daggers when doing so.

Unskilled Weapon Use
Sooner or later a wizard may be fored to take up a sword in defense. Whenever a character wields a weapon with which he has no proficiency, he receives a -4 attack penalty to his chance to hit. If the character continuously wields such weapons, it is within the scope of the GM to award XP to the character that should apply to a new class level in which training for the weapon is given.

Tripping a Foe
A character may take a -2 penalty to an attack roll to both strike and trip a foe at the same time. If the attack succeeds, the weapon does half damage and the foe must make a saving throw or be knocked off his or her feet to the ground. A foe knocked prone in this manner may be considered off-guard on the round that it is tripped (and thus susceptible to backstabs). Some weapons such as nets and pole arms should grant a +1 attack bonus to attempts to trip a foe.

Armor and Weapon Damage
Over time armor and weaponry can wear out, have holes punched through it, get notched and so forth. On certain conditions the GM should check to see if certain gear has suffered damage:

Each time one of the above instances happen, the character should make a saving throw for his gear based upon its composition, as follows; if it fails, the armor or weapon suffers a -1 penalty to AC or damage until it is repaired (usually for a percentage of cost). Gear that is reduced to zero effectiveness is destroyed.

Magical gear adds any magic bonus to the saving throw, and sometimes may be immune to damage if the GM rules it as such.

Gear should not be damaged on a “1” if that is the only chance it could otherwise be damaged. There’s a reason plate mail was so handy, even though it was terribly bulky; you were a late-medieval tank when ensconced within.

Leather Save: 12; +4 vs. crushing or bludgeoning weapons

Wood (shield) Save: 12; -2 vs. crushing or bludgeoning weapons

Ring or chainmail Save: 5; +2 vs. piercing weapons