The colony was far from uninhabited, though every station and post was unmanned. Every being in the community was busily working to construct a crude vessel, loaded in to a hastily conceived rail launcher which normally worked only for space cargo; the gee-force alone was enough to pulp a normal human. They didn’t seem to care; their cargo was swarming colonies of thick, metallic creatures not unlike terrestrial scarabs. The creatureswere hatching from the stomachs of the men and women who were once human in this community. We walked safely among them in our environmental suits until we encountered the hive master....

These hive mind entities are complex protein chain organisms, living dna, which ride on specially engineered carriers, insect like deep space organisms which can survive extremely harsh conditions while traveling between the stars. When approaching a new world with actual life, it settles and then begins to restructure its components into individual micro cellular organisms, each not much larger than a single protein chain strand, which are carried like airborne spores on the backs of air molecules. On entering a host, they begin to break down the old composite dna structure of the host, setting up a rewrite mechanism for rna outputs that will alter the creature, in a two-four week process into a new slave worker organism. Meanwhile, the carrier with alter into a new Hive Mind, from which control of the new colony will spread. As slave workers and warriors are created, the rapid absorption of the old life of the host world destroys the old ecosystem, replacing it with a completely new one.

The name for the hive creatures comes from old Anageni translations of surviving progenitor documents. Little else is known about these beings, but it is speculated that they are another byproduct of an ancient genetic war fought by the progenitors. The last infestation to occur was on Riker’s World, which was bombed out of existence by A.A.C. mercenaries.

The only saving grace a colony world has when dealing with this horrifying threat is that it, unlike other integrant adaptationist species, is incapable of reflecting anything more than an animal intelligence. While it creates units which are smart, and can work with an amazing cunning to spread and propagate and even use technology for such a purpose, it has no other social function, nor is capable of mimicking such functions. It cannot utilize spoken or visual language, and must operate mechanisms on a stimulus-response basis. In fact, it is often speculated that reason it can even grasp technology without culture is that this reflects its real purpose as a biogenetic war machine from a lost age.

Natural Weapons: various, but usually a bite at Str X1, razor-steel claws at Str X2, or Spines which do Str X2 and have a short range of usually 10 meters, fired through a propulsive gas sacs.

Hive Mind: Thrall to the creator T’Kanti’Ni’Chos. It can communicate with him via protein strands and through aerial biotic agents. He is utterly compelled to follow.

The T’Kanti Plague Spores: A being exposed to the space born biogenic spores of the T’Kanti Ni’Chos plague must immediately make an End check (add a -2 penalty after a minute or more of exposure, and –4 after ten minutes). Failure indicates infection. The subject will transform in to a hive worker (95% of the time) over an approximately 30 day period (roll 6D6 for number of days it takes). For Each 1D3 days of change, the character must take one attribute or skill from his or her character sheet and modify them up or down a point to reflect the default UPP template, until all template components have been matched, or the time runs out, at which point everything stays as it is at that point Physical skills tend to stay, but mental skills will get replaced; usually a point is removed from a mental skill and added to a useful physical skill. Ex: Martin has Space Science (xenology) 2, but no combat skill. In his next period of change, he loses 1 point of his Space Science skill and gains Melee (blades) 1.

If a character has more on his sheet than can be modified in the rolled timer period, the remaining variants stay, quirks of character that are unchanged from the transformation, residual traits unused in the change. Also, a character whos stats are better in strength, Endurance or Dexterity than the standard slave form will retain the better score, and does not lower those characteristics. 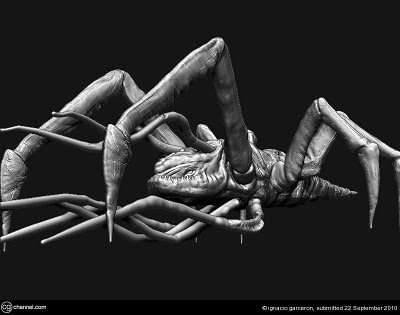 all text copyright 2011 by Nicholas Torbin Bergquist, all rights reserved
Posted by Doctor Futurity at 6:00 AM