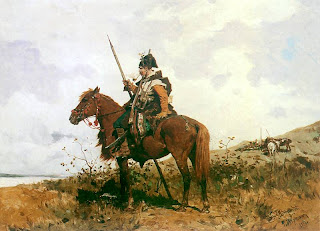 Even better it's here for $1 for the core rulebook, and the Monsters of Legend is similarly discounted ($11.95 for the PDF). I've managed to order physical copies of both through the local game shop and have been told they are on the way. Also, Matthew Sprange has posted the free PDF of the Spirit Magic rules up on the Mongoose site here.

So a few initial observations about the new edition, alias "the RPG formerly known as RQII:"

OGL Compatibility: It is 100% OGL and this is going to make it very tempting for pretty much anyone into third party publishing. I know its what I wanted; I have the Realms of Chirak Legend-Compatible edition almost ready to go already, maybe if I am truly dedicated I can get it done before Xmas (we'll see, babies have a way of throwing monkey wrenches into things like this).

Clean and Easy to Read Format: it's well formatted to take advantage of the digest size of the book, and my tired old eyes thank Mongoose for it!

Full Backwards Compatibility: I noticed very few changes, and mostly just slight tweaks and clarifications to the rules. The Spirit Magic rules are not in there, but the free PDF adds them back in. Other minor tweaks include leaving initiative as based off two stats instead of three, a slight revision to the cult following rules to emphasize the idea of cults, guilds and orders in a broader and more applicable manner, and other tiny fixes including more direction on how magic is awarded to new characters and such.

Other Changes: The core book has no discussion of monstrous or humanoid races as playable options; that is left up to the Monsters of Legend book, which is admittedly brief about such. Monsters of Legend excises all the Gloranthan beasties, which makes it a bit briefer, but the formatting is much improved from the Monster Coliseum days and it is now obvious which stat block belongs to what monster (arena combat rules are also absent). All in all though the rest of the content of the prior books remains here intact.

Overall: this is a must buy, and I am eager to see the physical print digest edition as soon as it shows up. My pipe dream involves being able to use Legend from here on out as my default system of choice for fantasy gaming. I might try to make it happen, although I have some local groups that are stoically resistant to anything non-D&D/Pathfinder. We shall see, maybe I can at last erode their wills enough to let them see how much better a system like Legend is at telling good tales of adventure....
Posted by Doctor Futurity at 1:31 PM