Swords & Wizardry Rules for the Ages of Lingusia 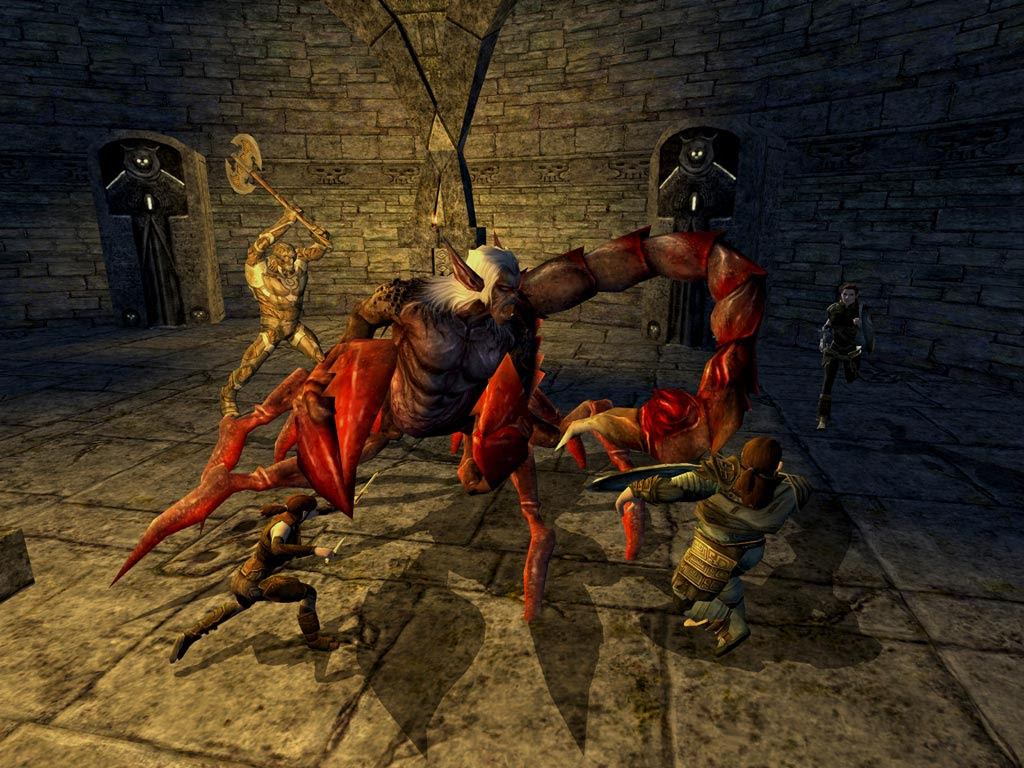 I had discussed this before, and now I'm back on it: some conversion mechanics for use with the Ages of Lingusia content I have run previously on the blog. I still hope to prettify and edit the entire mess and put it out as a proper book for people interested in such, but for now just "getting it out there" will do just fine.

Characters in the Ages of Lingusia

The Swords & Wizardry edition of Ages of Lingusia assumes you are using the Complete edition available from Frog God Gqames, which includes nine character classes. The class rules work more or less precisely as described in the S&W Complete rulebook, with the following optional additions:

Maximum Starting Hit Points
Instead of starting with an initial hit die at level one, all characters get a slight fighting chance by receiving maximum hit points at first level (the highest value of the first hit die plus any constitution bonus). This will slightly ease the pain of being ganked by two or three kobolds in the night.

Die Rolling Conventions
These are completely optional, but I use these die-rolling options specifically to grant characters a slightly heroic edge:

Attributes: attributes may use the “roll 4D6 and discard the lowest die” method of character generation to generate more heroic personas. All other characters except nefarious villains should roll the standard 3D6. Characters may distribute their attributes accordingly, or roll straight down the row, whichever they prefer.

Hit Dice: I have always been kind on hit dice, and characters may roll their hit die at each new level; if they do not like the result, they may re-roll, but must retain the second roll regardless of whether it is better or worse than the first. This mostly serves as a “do over” for 1s and 2s on the hit die roll, but provides better odds characters will have somewhat more favorable hit points over time.

Attribute Checks
Attributes can be used to resolve matters of skill, lore and aptitude about which there may be uncertainty otherwise. A D20 roll is compared to the attribute score, and if it is equal to or under then the character is granted the knowledge or completion of a certain task appropriate. Modifiers may be applied to the attribute to improve or lower the odds of success. As a rule of thumb, assume a range of +1 to +4 applied to the attribute (or subtracted from the die roll) for progressively easier tasks, and a -1 to -4 or higher modifier for increasingly difficult tasks.

Perception
Perception is a default trait that is equivalent to Wisdom, though elves may receive a +2 bonus to the Perception score. A D20 check, with bonuses or penalties applied to Perception, may be rolled (equal to or under) to resolve any uncertainty as to whether the character spots a fine detail that might otherwise not be noticed or is overlooked.

Luck
Everyone needs a luck score, and this value is always rolled using a straight 3D6. The luck score is a tool for the GM to use with attribute checks to resolve uncertainties involving situations where luck plays a big factor. Did Kormak stumble across the mugging of Lady Cateris in time? Did Maximus happen to drop the Star Sapphire of Zephon when he was drunk off his ass? Luck can be a fun way of deciding if such things happen.
Options by Class
There are a few additional optional rules for some classes, as indicated below. These options apply to the classes presented in S&W Complete:

Neutral clerics are an important part of Lingusia, and have the distinct advantage of being able to either banish or command undead with a turn check.

Clerics optionally gain bonus spell slots at 1st level, based on wisdom. A 1st level cleric with a bonus spell slot may use it to learn 1st level spells at that time, even though he normally doesn’t gain spell access until level 2.

Druids
Druids optionally gain bonus spell slots based on the average of their wisdom and charisma.

Fighters
A fighter gains a new ability: he may make three attacks every two combat rounds at level 7, and at level 12 may make 2 attacks per round. These attacks are not restricted by HD like the default Multiple Attacks ability, which he retains as well. This modification allows melee fighters to gain an additional edge over other martial classes (who get an additional perk, below).

Rangers, Monks and Paladins
Each of these classes are permitted a full bonus to hit and damage for high strength scores.

Magic Users
In Lingusia, mages can prepare spells when they have slots available for those spells to imprint in their mind. The time taken to imprint a spell is approximately 15 minutes of focused concentration and effort per level of spell. There is not daily limit; if a magic user has just finished casting three first level spells and two second level spells and has three hours to rest after his ordeal, he has more than the necessary hour and forty five minutes needed to reacquire his spells.

Under this system, spell slots (especially at lower levels) become a resource that can be recovered between battles and other strenuous events that lead to the use of magic. The magic user is only in trouble if he is forced to deal with a lengthy ordeal during which he has neither time nor opportunity to recover used magic, or no access to his spellbook.

Under the optional rules a magic user gains bonus spell slots based on his intelligence (see next).

New Optional Magic Rules
The following optional magic rules can be used at your own discretion. The basic rule (bonus spells) is the default assumption for the Ages of Lingusia setting, and isn’t terribly world-shattering, though it will front-load spell casters with a little more magic. The subsequent optional spell point system is provided purely as an interesting alternative rule for the use of magic to experiment with; although I used it a great deal in the old days, I actually favor the more traditional spell memorization system these days, but on occasion it’s fun to run a campaign with gonzo spell point-based magic systems.

Optional Bonus Spell Slots
Some spell casters receive bonus spell slots. The bonus slots are determined as follows, and provide one extra slot that can be used for the indicated level of spell:

Ability scores are determined as follows:

Druids: The average of Wisdom and Charisma (Wis+Cha/2)

Optional System: Spell Points
In the old days I always implemented a spell point system, although in more recent years I have grown fond of the “Vancian” memorization system. Presented here is the spell point mechanic for your consideration.

Under this system spells cost Spell Points (SPs) to cast for arcane magic or Divine Points (DPs) for clerical and druidic magic. If for some reason a character has more than one source of magic, he must keep separate track of each spell point pool.

Under this system all spell casters cast “on the fly,” without having to memorize spells, though they must have necessary material components ready for use. Spell points are recovered at a variable rate. The default rate (for fast magic games) is 1 point per hour of rest, or all SPs per 8 hours of sleep. This rate can be adjusted as follows:

Default: 1 point per hour of rest or all points after a ful night’s sleep

Fast Magic: 1 point recovered per 10 minutes of rest (or all points after a night’s sleep)

Spell points are limited by the maximum casting level of the caster; thus, for example, magic users can’t access 5th level spells until level 9, although once they reach level 9 they can spend spell points on any such spells up to that level that they add to their spell book. Likewise, spell points are not capped for use like slots, so there is nothing preventing that 9th level mage from using all 32 spell points to cast magic missile over and over again if he so desires.

The chief advantage of a spell point mechanic is that it frees up spell casters to use spells according to need rather than trying to anticipate what may be required of them. Many spells tend to go unused at the moment when they could otherwise be handy to cast, and in this system that rarely ever happens except as an oversight.

The downside of a spell point system is that it makes spell casters remarkably more flexible and potentially much more powerful in later levels. Because the spell point do not cap the number of spells of a given level, it means that there could easily by mages in the world who specialize in lower level magic while retaining higher levels specifically for the extra SP. Conversely, it means at high levels one particularly devious mage could destructively unleash a few high level spells in favor of numerous lower level spells.

In my experience with using this system, the great equalizer boils down to judicious use of the same system with villain NPC mages and priests. When the NPCs use the same mechanic, it means that the GM can be just as devious, albeit much more often and in many creative ways than the players.

The following chart provides a breakdown of spell points per level for each caster type as well as an indication at what point access to new spell levels is gained: 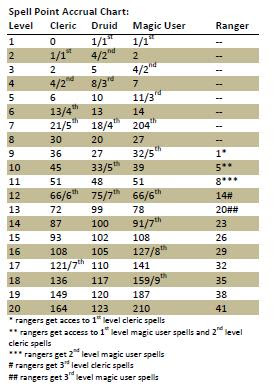 You can use the following chart to calculate bonus spell points (see Bonus Spell Slots, above) if using that optional rule as well: 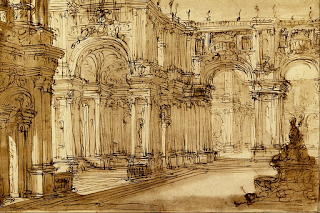