The Federated Marines and the Dragoon Special Units


Once, during a Cerr’K’Taa invasion, a sweeper squad of federation marines arrived. They were inscrutable warriors, the ultimate killers. Armed to the teeth which high energy particle weapons, gravitic rifles, A-M tanks, and supported by a troop of Ares class Dragoons, it was hard to imagine any of them were human. And it turns out that most of them weren’t, had indeed never known a true mother or father in their life, just the cold steel walls of a birthing plant somewhere back in the core. Of course, real humans wouldn’t be so insane as to head out in to uncharted colonial space to protect and handful of colonists, researchers, and prospectors, would they?

The HFC is a thinly spread unity of human space, keeping a vast diversity of otherwise independent interstellar and planetary governments and corporations in contact and legal agreement with one another. While the HFC is, itself, funded primarily by the core worlds, it has a modest but impressive military. In the frontiers of space, the best military units are small, efficient, and deadly. They are capable of instigating peace by their mere presence, and are worthy of attracting the attention of all but the most obtuse enemies. To this end, the HFC has created the Interstellar Navy and the Federated Marines to enforce the law and keep the peace.

The Federated Marines are, as a group, a rough but disciplined bunch. Members are drawn from three sources:

1. Volunteers. There are, believe it or not, people who would find this sort of life tempting for any number of reasons. Many of the FM’s forces are drawn from backwater worlds with small, unsuccessful colonies that cannot afford to get away from whatever tepid hell-hole they grew up in. The FM takes anyone, even allied alien forces. Praektorians, example, make up fully 30% of all FM forces.

2. They make you from scratch. Simulants are a common practice in this era, genetically grown and bred human beings designed for specific tasks or duties. Simulants are a hardier, tougher, meaner lot than most regular humans, and the ones bred for the marines are crafted specifically to be killing machines. The rules for simulant characters will be discussed in more detail in a bit.

3. You are sentenced to a term with the FM. Federated Marines, and Dragoons especially, are sometimes former convicts who were given the option to serve a life sentence in the harshest patrolled zones of the HFC. Convict marines are often kept in special military units, and assigned to regions where they are monitored carefully. Some who excel and prove themselves in a magnanimous fashion are granted the right to move on to more regular duties, but they are never allowed to leave the FM until age prohibits them from functioning effectively.

The difference between Federated Marines and Dragoons is simple. FM’s slap on a suit and armor, have some cybernetic or gene-mods, and are ornery. Dragoons are ornery too, but that’s because less than 10-12% of their biological body is still present; the rest of the Dragoon has been supplanted by the most sophisticated killing machine body money can buy. Dragoons are effectively robots for purposes of character design, and very rough ones, at that. Many are former criminals, who have been further subjected to a barrage of psychotropic drugs, mental stimulants and pacifiers, and extreme conditioning procedures to make them functional, obeying forces. Dragoons scare the crap out of regular Marines, but they are the heavy artillery everyone has come to rely on. Without the Dragoons, the really big bad guys would be a bitch to deal with.

Characters of both military types are possible in any Ad Astra campaign. You should pick your choice of career and species first, and then come here to receive further guidance in the character creation process. To run Marine and Dragoon characters, follow the following guidelines in character design:

All Federated Marines go through a rigorous training period. A suggested profile for a novice marine is as follows. Federated Marines are given the option to build upon and enhance their cybernetic modifications, though any deleterious effect on their psyche will lead to a halt order on further modifications until treatment is received.

The Marine career path is the best possible choice for a Federated Marine, and the details of that career will reflect a typical marine’s life path.

Federated Marines receive the following on starting their first term in the service: 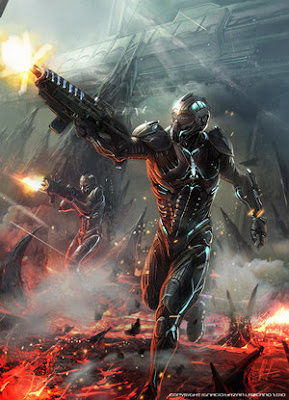