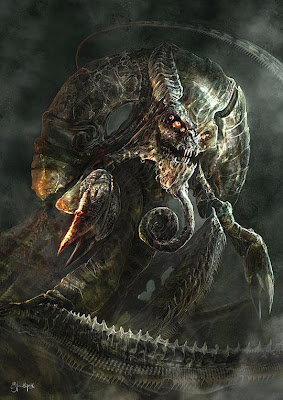 
The mimic form looked human, almost entirely so, until it knew it had been detected. It quickly split open it’s hidden chest cavity and a proboscoid appendage ripped through its clothing, and began to pump out a thick, vaporous mist. As it spouted claws and a series of whip like tentacles, it began a high-pitched keening wail, as if to alert more of its kind yet undetected in the crowds. Throughout the spaceport, more keening wails returned, and people began to scream in fear.

This invasive, plant-like life form has been dubbed an “Integrant Adaptationist,” a fairly unique sort of life form that developed an aggressive predatory interest in furthering its own survival by absorbing the genetic and cognitive essence of its prey and competitors. Functionally, it is a mass of tendrils attached to a central, often rooted stump, which contains the vital organs of its main form. The tendrils are both predatory hunting appendages and “pod forms,” capable of growing young, fast four legged hunting units that are derived from the absorbed matter of previously captured prey. These pod units can mimic any physical form and an approximation (imperfect) of the dna of a specific host organism which has been “absorbed” by the host mother. This means they can effectively integrate themselves into a given alien society and slowly begin an elaborate conversion process.

The Cerr’K’Ta are found on several worlds in the FWZ, and it has been rumored that they, in fact, might have once been a genetically engineered mechanism for war, left over long ago by the Progenitors or some other now extinct species. The first contact with the Cerr’K’Ta was with the Anageni, who unwittingly stumbled upon it on a newly discovered habitable world. The Cerr’K’Ta absorbed the essence of its Anageni victims, and in turn duplicated the protein strand reading and writing abilities of its victims, as well as a partial sum of their space faring knowledge. This early disaster in Anageni history forced them into a bloody war in an effort to save themselves from the inimical machinations of the Cerr’K’Ta’s desire to conquer and absorb. To this day, it is a common fear among colonists of the GICH to run across a surviving Cerr’K’Ta with the Anageni modifications in its system, looking for a means of planetary escape.

Cerr’K’Ta offspring mimic the specific chosen host organism. As such, stats will reflect, at least on a prima fascia level, the actual host, but with some special details: The actual spawn organism will have a better than average Boy score (+3), and any sort of simple genetic or invasive body exam will reveal the duplicitous nature of the imitating organism. A surface exam will reveal no outward details.

The mimic form can alter itself in to a more functional, versatile organism with a little time, usually about an hour or two. It can also recombine with the mother node, which is a much larger, controlling unit from which the mimics are controlled. It is exceptionally intelligent, but it is asocial, enigmatic by any conventional standard, and perceives a moral perspective (if you can use such a term) that is specifically geared only to the preservation of its own species at the expense of its own host species. Any, absolutely any, appearance of emotion, social behavior, and other such trappings of most species are merely a clever mimicry on its part to further integrate and manipulate the host species.

The specific abilities of mimic forms, in addition to the currently manipulated stat forms, are:

Genetic Mimicry: Because they can change form at will, Cerr’Ka’Ta mimics can, within a 45-75 minute period, alter their shape to any other chosen host form in which the host mother has extracted DNA from, or which is already a part of the collective unit (so you could have duplicates of the same mimicked individual).

Genetic Memory Recall: The mimic form will take on the Intelligence, Education, and any skills of the host target, as well as augmented physical functions. If someone questions it about specific and difficult memories or details, it may make an Int roll to answer correctly. If it fails, then it will be at –2 on any further such checks as it has imperfect memories of the host victim. This rule also applies for any attempted knowledge or persuasion checks based on the host’s skills.

Proboscis Attack: This natural attack does 3D6 damage and releases infectious quasi-mitochondrial spores. The target, if struck with any effect, must make a End check or become infected. If the target is wounded by the attack then it is at –2 on the roll. If it is incapacitated or killed then the infection is automatic. The Cerr’K’Ta can mimic dead bodies, but cannot gain any of the benefits of genetic memory recall on a corpse (it reverts to its own default Int, Edu and skills).

Biogenic Self Modification: The Cerr’K’Ta can modify itself at will, taking approximately 10 minutes for one change (Make Int check and subtract a number of minutes equal to the effect from the base of 10 minutes.) The mimic can emulate a single other species trait, skill or attribute it has been exposed to, or can generate a random melee attack from its body which does StrX2 damage. Each time it uses this ability it must make an End check. If it fails, then it cannot produce any more effects until it has rested for a day. If it succeeds, it can make as many effects as it has End. If it gets a critical failure on its effect, it immediately loses all modifications and reverts to its base imitated form in the immortal words of Herbert West: Tissue Rejection!)