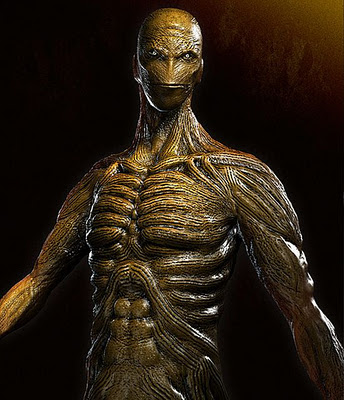 
The gangly, thick-skinned yet oddly bony Farseers are primitive by all standards, but their tiny black eyes inset over lean mouths at the ends of such spindly necks indicate an ancient intelligence and legacy long beyond human counting. They have lived so long, seen so much that they are beyond our simple pursuit of science and discovery. Their vaguely humanoid tripodal body seems remarkably similar to the tripodal forms of the precursors.....

The Hypolate Farseers are a genetic descendant of the Hypolate progenitors, a vaguely humanoid species which is best described as an exo-skeletal, almost deathly being with only the vaguest identified characteristics. Their oveall appearance is one of the gangly and walking dead, but with heads drooped forward, protruding from their chest cavity, and lean, whithered features from which black and grey flesh hangs. They see themselves as the idealized conception of sentience, however.

Hypolate Farseers have been encountered only rarely. A primitive version of the species dwells in the Biodome of Trikkus I, where the Quarus operates. Additional farseers, also living aboriginal and nomadic existences on other worlds, have been found in regions of space which the Pelegranen lay claim to.

The farseers are known telepaths and psionic beings by nature. Though they are found dwelling in a stone-age diaspora across many worlds, they clearly harken from a more advanced species, and seem to have a genetic memory of their ancestry. Each community has a shaman, who’s job in the community is to keep the memories and lives of their generations alive, and to tell the tale of their ancestral decline.

Farseers who leave their homeworlds usually due so due to force, and seek to return as soon as possible. Some have been known to go mad, as their species define it, and acquire a sort of wanderlust. Such farseers make good characters, but their madness is very real, and sometimes they act deranged in space, as if their genetic recall is out of whack, and they begin channeling the personality of their mythic ancestors.

Skills: Various, usually Melee (any) 1, Athletics (any) 1, Recon 1 and 1-2 terms in a career
Special Abilities:

Attributes: Farseers have -1 Endurance but +1 Intelligence and Education.

Psionics: Farseers are all psionically adept, and spend much time developing their talents. All Farseers start play automatically knowing their Psi Strength and may pursue a career path in a Psionic path is they so desire.

Unique Immunity: Bane of the Harbingers. The Harbingers are fearful of the farseers, and direct attacks, challenges or other rolls by the harbingers or their minions suffer a –2 penalty when aimed against the Farseer due to the embedded fear of their species.