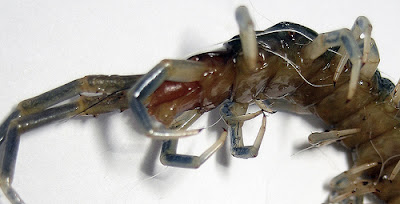 
About seventy thousand years ago, a new visitor arrived, the aptly named Stick-Men, who themselves prefer to be called the Controllers. The Stick Men are a diminutive race of parasitic organisms, silicone based, which inhabit any number of foreign hosts and gain cortical control over their targets. In humans, their presence along the spinal cord and cortex of the brain is aggravating and stimulates rapid cancerous growth. In turn, the stick man extrudes an enzyme that alleviates the pain of the host and extends its life as long as it is completely compliant with all stick-man manipulations.

The stick-men are fifth dimensional beings, and are also from a completely different universe, and travel via wormholes from one universe to the next. They are for unknown reasons unable to transfer from one wormhole to another without being destroyed, and require a host organism to transfer into or through. As they spread like a cancer throughout the universes, they take over hosts, seek out sentient beings, and then work to develop or gain control of the technology to make the next leap.

The machinations of the stick-men are inimical to human understanding, but it is known that they seek another, ancient race they call the First Ones. These first ones are descried as non corporeal beings of energy which also take on host forms, but usually choosing non sentient hosts. They have been pursuing the First Ones for at least two expansion cycles of the universe, they claim, and explain that they seek to integrate the First Ones into their own society. Somehow, people who actually meet, deal with, and talk to them through their hosts, never believe them, feeling instead like dealing with stick men is like dealing with infernal demons.

Weak but Brainy: Stick-men are scrawny and splat easily. They roll only 1D6 for Str and End. They receive a +3 bonus to Int and Edu, however.

Diminutive Size: Stick-men are small, not much larger than big rats or enormous insects, and attackers are at –2 to hit them.

Stinger: A stick-man invades a suitable host by injecting it with a highly invasive biogenic neurotoxin that analyzes the host’s immune system and adjusts its toxicity accordingly to paralyze the host. The stick-man then uses its razor-sharp fore claws to cut through tissue to the cortical membrane or primary controlling nerve tissue of that host. It stimulates healing of the wound through more enzymes to seal the wound once inside.

In game terms, if the stick-man makes a fighting roll that hits and the target is stunned or rendered unconscious, the target must make a check on his End vs. the poison of the Stick-Man (which provides a -2 penalty to most human-like species) or succumb to the neurotoxin in 1d4 combat rounds, becoming paralyzed on the final round. It takes the stick-man another 1d4 rounds to imbed itself in the host, and only a sufficiently impenetrable armor will prevent such from happening.

Once in the host, the stick-man has control over all skill, attribute, and edge functions of the host. The host becomes an unconscious guinea pig of the stick-man, and is unable to do anything except observe from afar. Removal of the stick-man without the Medic skill and medical facilities results in an incapacitating coma, and death if the host fails a End check. A Medic roll at a –2 modifier may be used to attempt the operation in the field (modifier goes away if real medical facilities are at hand). Success means the host is incapacitated but stable, and will recover in a number of days equal to the effect. A maximum effect means immediate recovery.

In the course of this operation, it is possible the Stick-Man will react to protect itself, or even flee the host. If the medic in question wishes to incapacitate or capture the Stick-Man, he must make a contested check of his Medic skill vs. the Stick-Man’s Dex, or the Stick-Man will escape the host and attempt flight. Suitable arrangements made to prevent this beforehand may keep it around anyway, of course. Desperate Stick-Men may resort to trying to sting the medical professionals around it and seek a new host as quickly as possible, if such options are available. All of this assumes its current host form has been incapacitated or restrained, of course.

Adrenaline Surge: When in a host, the Stick-Man can induce an adrenaline surge once per hour that lasts 3D6 minutes, adding +1D6 to each physical stat for that period. Afterwards, the host must make an End check; failure means the host’s stat goes down for 1D6 hours by an amount equal to the effect it failed by. If it gets an effect of 6, then it loses 1D6 points permanently!