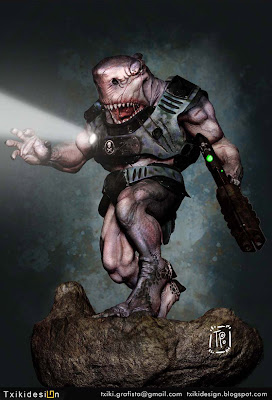 
Someone once characterized the Pelegranen as bipedal, snub-nosed, hairless dogs with a penchant for scaliness. If you add strong, membranous glider wings running from toe to finger, and try not to think of the funny flying lizards found on Tau Ceti, then you get the hint. But generally, you won’t know for sure, since you’ll usually meet them in heavily armored combat suits with loads of serious ordnance pointed at you while their picket ships inform you your local stake in space just joined their budding empire.

The species known as the Pelegranen are a local star faring race in the vicinity of the Klendara Nebula, two thousand light years from the edge of the Coreward Fringe. Their region of space can be directly accessed via the wormhole technology left behind by the progenitors from the Starry Crater site in the Capella II system.

The Pelegranen have been at war between their own collective governments for centuries now. Local intelligent species have been recruited into this war with great frequency. Recently, the Talon Empire, ruled by Thergrannet, overlord of the cruel Pelegranen, uncovered an amazing find: hidden in the previously unsurveyed star system called Trikkus is a vast and ancient armada of the ancient Progenitor Star Empire. The Pelegranen call the progenitors the Farseers, and have found scattered colonial s of the ancient multi species empire across several of their sectors of space, but the notion that some salvageable technology might exist for them to exploit is unfathomable. Suddenly, the distant scout ship Trecnos uncovered two hundred and forty intact dreadnoughts, and a vast shielded research center on the first planet of the system, Trikkus I.

Efforts to board the dreadnoughts proved futile, as the vessels maintained an active defense grid, and mysteriously were still powered up from an unknown source after over five hundred million years! The first ships to attempt a boarding were annihilated by indescribable energy weapons that vaporized them.

The base proved equally challenging, with a vast force field on the otherwise uninhabited planet shielding a seven hundred mile wide region, a self-contained micro ecosystem which had been thriving since the ancient, utterly mysterious extinction of the farseers. Attempts to bridge the force shield were met with violent armed resistance from powerful eight-limbed beings that were otherwise non sentient.

Presently, the Pelegranen have established a military research station in orbit and on the planet. They have spent six months now trying to break the code and gain access to this secret progenitor base.

The most exciting thing to happen in this time was the discovery of the human presence, researchers from the Free world Corp. team exploring the newly discovered wormhole portal. Attempts at communication were made, without success. As a result of the paranoia that their enemies will gain access to the technology within, General Bochor himself, leader of the largest star fleet in the empire, is personally arriving to beat down the shields as necessary. They have never heard of the humans, and assume that they are enemies or rivals.

The pelegranen are stocky, tall, and reptilian (at least circumstantially). They have long, angular heads ending abruptly, like a hammerhead shark’s would. They are wide in the ribcage, broad in arm musculature, and have immense, trunk like legs which gives them extremely fast, cheetah like movement. They have tails, slender and used mostly for balance in running. Elders and variant races of their species have great frill like skin flaps which extend from their backs and can be used for gliding for short distances. Many ground dwelling pelegranen intentionally amputate these frills to reflect their rank and position in society. Elite pelegranen and certain religious or political groups never amputate their frills.

Pelegranen are vicious, predatory, cunning, highly intelligent, and are almost incapable of understanding the idea of a civilization which advances through means other than the threat of extinction at the hands of your neighbors. Currently, in their region of space they have twelve active empires, and all aliens have been subjugated by the pelegranen. The idea of an alien power to rival their own is cause for war.

Pelegranen receive the following edges for their species:

Natural Weapons: They have a bite attack and a claw attack.

Optional Glider Wings: Some Pelegranen retain their glider wings. This grants them a fly movement double their pace. They cannot take off except as a glider (from a height and with good wind). At the start of character creation, a Pelegranen may make a Dex check, using his Str modifier as a bonus if it is negative or high if it is positive. If he succeeds, then he may choose to be a glider.

Bloodthirsty: Pelegranen fight for keeps and gain this hindrance as a species. Some Peleganen learn discipline and can gain control of it. Whenever in combat, a Pelegranen must make an Int check to cease combat should he need to, or to calm down and not continue attacking targets. If a dominant pelegranen with a higher social standing is present, then that pelegranen may apply his Soc modifier as a bonus to the bererk pelegranen’s roll, to help calm him.

Reptilian Senses: Pelegranen can smell, see sudden movement, and taste better than normal, and may get a +1 modifier to checks involving these three heightened senses.