Some dragoons are so far removed from the common human that they are closer to robots, and may even be designed as if they were such. For a more “human” dragoon, treat them as Marines with the following additional package ideas. The following Cybernetic enhancements are placed on a Dragoon to bring them up to FM standards. Most Dragoons are recruited from amongst desperate criminals, those who have experienced crippling and irreparable injuries, and others.
Ares Class Dragoon Infantry Unit:

Armor: Dragoons have the equivalent protection of Powered Armor with an Armor rating of 14. This is a duralloy mod armor enhancement, and is part of their body.

Environmental Adaptation against extreme heat, extreme cold, vacuum, and water. The dragoon is unaffected by these extremes.

Nano-Regeneration allows for nanotech healing agents to repair damage (but not to armor), giving a +2 modifier to End checks for healing.

Enhanced Senses: Sonar, Radar, Radio Infrared, and hearing are all added or boosted.

Special Attack: Ares UR55 Particle Cannon The equivalent of a PGMP-12 or sometimes larger.

Size: The Dragoon is larger than normal,averaging 8-10 feet in height.

Owned: Federated Commonwealth Marines own the dragoon’s body and soul, literally. Dragoons really don’t muster out; a PC Dragoon which is forced out of service by failing a Survival roll, or at an appropriate Life Event, may declare it tries to go rogue, or become a drifter. It is then wanted and has the Federated Commonwealth as an enemy. Alternatively, a Dragoon which reaches officer rank 5 or better and which has at least 6 benefist for mustering out may expend those benefits to purchase its freedom.

Ageless: The treatment of what little organics remain in the Dragoons are such that they never worry about ageing effects. Dragoons never die of old age; usually just disease, cancer and in battle.

Outsider: The monstrous, mechanoid appearance and inability of the dragoon to interact normally with humans again, as well as being social and criminal outcasts in origin, forces all Dragoons to start with a Social Standing of 2. This can improve, especially if a Dragoon becomes an officer by commission, but they can never hold any noble rank no matter how high the social standing goes.

Limited Power Source: Dragoons use power from internal fusion plants, and rarely run out, but if this is ever compromised (such as on a called shot at maximum effect), there is A 1 in 6 chance the power plant will explode, taking the dragoon and a lot of turf with it. If the plant is shut off or removed, the dragoon is rendered inert, and emergency back-ups will kick in after 30 seconds, but provide only one hour of power for mobility. After the hour, it is inert, and a small battery keeps the biological part of the dragoon alive for 48 hours, after which it runs out and dies.

Through the various Phases of time in the Ad Astra setting, marine combat armor has evolved from armored vaccuum suits with nominal exosekeletal power-up to state of the art, high-tech mech suits which average about 10-16 feet in height and are as well armed and armored as most high-tech interstellar combat fighters (and more versatile, to boot).

Combat armor in Ad Astra is easily defined by the Powered Armor listings in the Traveller equipment rules.

The best armor available during this period is Infantry Battle Suit dress. Towards the end of this period, Hard Armor becomes available.

A heavy combat vacc suit, designed with flexible polyweave duralloy armor plating, self-sealing mesh, a one week recycling life support system, and exoskeletal support. Some units, mostly for space-going missions, include zero-gee jet thrusters. During Phase I, these suits are defined as Hard Armor. By the end of Phase I and then on, use the Powered Armor listings (scout, battle, and heavy). All of these suits have the following extra features:

Life Support One week of extended life support in a completely hostile environment. Goes to 1 month by phase II and six months by phase III.

Built to serve as the standard heavy-assault weapon for Ares-armored infantry, this massive rifle fires magnetically launched, high-velocity slugs with no recoil, making it ideal for zero-gee combat missions.

(Use the Rocket Launcher stats, TL 9)

A heavy mobile launch cannon loaded with homing missiles. This is a favored portable assault weapon among powered armor troopers.

Sometimes you find yourself in the trenches in man to man combat, and nothing cuts through duralloy like a monofilament assault blade. On a critical failure of 1 in an attack, the blade breaks! Monofilament blades are so effective that against standard (i.e. non energy-based) armor they treat armor protection as half normal value. 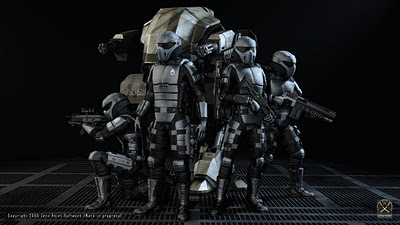 
Simulants are effectively genetically enhanced, test-tube grown humans, created from whole genetic cloth and tailored to the specific needs of a given job. Simulants, therefore, have a limited capacity for variation. There are about three hundred “types” from which the FM draws its best stock, and they leave intentional random mutational factors in the growth process to insure that there is a factor of individuality between the simulants. It is possible to have an army of true clones who all look alike, but the need to assert individuality in the face of such sameness is in the HFC charter.

Simulants are tailored in the transgenic design process to be most functional in their profession. Ergo, you get a very narrow starting point spread for you attributes, and each stimulant type is engrained with certain specific skills that must be paid for with starting skill points at the minimum indicated levels. These stats will change as the stimulant goes through it’s career path, but the base ranges are as follows. Also, note that Simulants are specifically bred for the military; they automatically get to join one of the military careers for their first term. They can not actually leave their chosen field of service until they have served at least 3 terms, although they may attempt to switch to different military careers. A stimulant who fails a second or later enlistment attempt always gets submitted to the draft at that time, until his first three terms are completed. If a stimulant is forced to muster out for an injury, however, he is also then discharged from his duties and may resume a career as a free man.

Simulants of a unique or specialized nature may be custom designed, but most simulants in the Federated Navy have a common package of transgenic modifications, which always includes the Wafer Jack and Biomonitor Implant (see above on the Marines). A sample design focus follows:

Adaptation: Vacuum, Radiation, Extreme Cold. The spacer gets a +2 bonus on End checks against such forms of damage. Spacers can resist hard vacuum effects and hold their breath for 3xEnd minutes.

Subdermal Armor: Spacers have 1 point of armor for a nanoweave armored skin.

This simulant was born and bred for the extremes of space; each Spacer is treated with a nano fiber weave in their skin which hardens them to the rigors of outer space; they are capable of holding their breath for great lengths, and have been implanted with a radio link for communication.