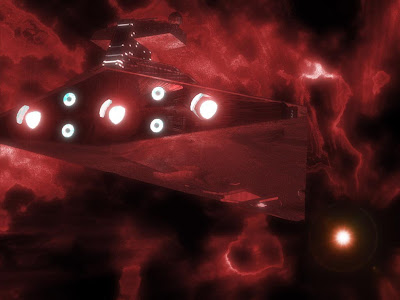 My wife jumped on the bandwagon months ago with a preorder of the $150.00 super crazy collector's edition featuring a Darth Ugly action statue. I resisted. I have spent most of the last year burnt out on MMOs and focused on the decidedly more engaging single player experiences offered in most other games (or the short and frenetic madness of pvp-focused games like Black Ops and GoW 3). I haven't felt very "Star Wars-ish." I didn't want to buy into yet another MMO that was destined to string me to disappointment after a week or two (Rift, Star Trek Online, DCUO, etc.), chiefly with the fact that MMOs seem necessarily limited in their storytelling conventions and just how they can engage a player with that oft-ignored -RPG component that can sometimes be found at the end of the MMO-part.

But yeah, after weeks of ignoring my wife's Star Wars: The Old Republic experiences in beta and then special pre-release early start play, I finally caved and got this game yesterday. I can tell you this much so far:

1. I'm glad I'm playing it now, because I always did want to play KOTOR 3 and this is it.

2. Bioware has managed to wed MMO styled gameplay to their traditional single player RPG storytelling medium. This turned out to work very well. I basically feel like I'm playing KOTOR 3 but with the occasional need to ignore random people running around and a chat window.

3. Whoever made those Bioware movies should be comissioned immediately by Lucas Arts to make a Star Wars trilogy of films using the CGI displayed here. Oh, and maybe give them cart blanche to do whatever the hell sort of storyline they want.

4. The gameplay is really conventional (I haven't even read the tutorial bits, the gameplay is a natural to anyone who's played any MMOs at all since December 2004) but this does not detract from the fun. The shoot-them-up component I've experienced so far as a republic trooper has been fairly engaging as starter zones go.

5. Bioware-style dialogue trees. I am already developing a sense of who my trooper cyborg is and whether he's a maverick, a tow-the-line sort of guy, or an embittered soul. I'm only a few hours in and I'm already being confronted with tough decisions. Hell, I got a classic, "fetch me my necklace" quest and it rapidly blew up into a "she could be a spy for the Sith Empire!" subplot. I really don't know what I'd do with all my free time if it weren't for Bioware and Bethesda knocking out such quality, thoughtful RPGs these days. Read a lot more, I guess.

6. Fully voiced, including your own character. I can't express strongly enough what an impact this has. Age of Conan had this up to about level 20-22, for example, and it was well done (until you left the starter zone and voiced dialogue suddenly got very scarce). Hell, even among single player RPGs I think a voiced protagonist is a smart move; contrast Mass Effect with Dragon Age or Fallout 3, for example.

7. Graphics are good. I cranked it up to max and it is a nice looking game, for an MMO. Not as slick as a dedicated single player experience, but still superior to most MMOs on the market right now.

So I opted for a three months at a time subscription plan. I think it will take me at good long time to finish all of the individual character campaigns in SWTOR, and it's the first MMO I've played since DDO and Champions Online that really grabbed me and now has me keen to play more.

While playing with Marcus in my lap last night he did something I hadn't seen to date: he started staring long and hard at the screen.* Did he recognize shapes and images as the same stuff he sees Mom playing all the time? Or is he just now starting to develop better, far ranging vision? I need to read up a bit on this. He's starting to pay more attention to odd things, like staring intensely at my book shelf (which I imagine looks like a panoply of colors to him) or his stuffed monkeys and ducks hanging from his comfy baby chair.

Okay, enough rambling! I have some preloaded stuff for my S&W Ages articles, and am hoping to get another TME feature done this weekend, but if I don't post much else between now and New Years, have a grand old time for the holidays!

*Should he even be looking at a computer screen? Try reading up on early childhood parenting, and you'll discover more wacked out, contradictory information than you can shake a stick at!
Posted by Doctor Futurity at 7:00 AM