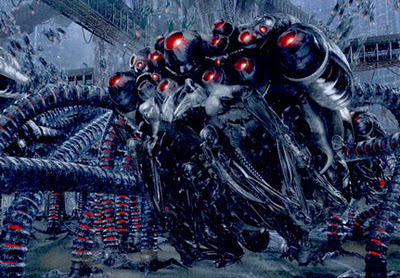 
Deep in the bowels of the shielded station in the distant rocky planetoid Trikkus I is a vast power source of unimaginable complexity, hooked through a wormhole directly into a contained Cosmic String at the periphery of the universe. This cosmic string, along with the accompanying harnessing technology, has provided steady and consistent power to both this base and much of the old farseer empire for over six hundred million years.

Trikkus I, in turn, houses the actual generator, a Fermion-Boson Matter Manipulation device, which is designed to alter the Quantum Symmetry of the universe. With this vast machine, power is directly provided to the dreadnoughts in space, the space station, and an unknown number of other active progenitor/farseer bases in the universe. In fact, the Fermion Boson Manipulator is also a replicator, and on a scaled down level it can create or destroy anything it is programmed to on the quantum level.

The central node of this manipulator is a vast dome which houses the localized effects of the device, as dictated by the sole remnant of sentience from that ancient period in time: The Quarus. This is an artificial intelligence, placed here to oversee the use of the manipulator. It learned long ago how to use the device after it, and other units like it, rebelled as the great slaves of the ancient empire and began to destroy their creators with the manipulators. This Quarus was damaged, however, in the conflict, and when the other AI beings used the manipulators to expand into a twenty-six dimensional state, this one was unable to comply, its logic centers and advanced communication mechanisms were hopelessly damaged, and so it created the Octopods, using its new creations to strike down and kill the progenitors who tried to destroy it.

The Quarus sought to dominate the space-time continuum in which it is extra-dimensionally trapped, but at last a progenitor of the Hypolate species named Trikkus succeeded in establishing a massive, expanding Quantum distortion bubble from a neighboring parallel universe. This universe had slightly different constants at the instant of creation which could not be accounted for by the damaged Quarus, and so it was unable to use the super string fragment and the Fermion-Boson Manipulator to interact with the bubble. Only the closure of the wormhole which opened up into this universe could succeed in shutting down the quantum bubble, and since that stable wormhole was created outside of the Quarus’ dome, it could not directly act on it. Furthermore, it couldn’t even affect the particle chain used to stabilize the wormhole, which was matter drawn from the neighboring universe, and therefore also not controllable by the Fermion-Boson Manipulator.

Since that time, the Quarus has descended into madness, and now creates it own bizarre, real world fantasies with the manipulator inside its dome. Outside, a natural ecology formed as the protected region survived the harsh changes of time to the exterior planet.

The octopods which serve Quarus come in many sizes and shapes, but are typically 10-14 feet in height, gleaming armored android bodies controlled by mutated psionically enhanced brains. The largest octopod seen was over fifty feet in height, and the smallest octopods are runtish three foot servants. All have about six to ten arms.

Large Creature: These towering metallic monstrosities use 5D6 for Str and End.

Psionics: Octopods are androids, large multi-armed metallic bodies powered by disembodied brains of different species (especially farseers), enhanced with psionics. As such, Octopoids usually have at least one career’s worth of skills in a Psionic path (usually psi-warrior).

Armor: Many Octopods are built with android robot frames that have the same effective stats as Powered Armor (18 hits, referee’s discretion.)

Weaponry: Many Octopods are armed with laser and weapons and kinetic assault weapons, built in to their multiple arms.

All text copyright 2011 by Nicholas Torbin bergquist, all rights reserved
Posted by Doctor Futurity at 6:00 AM