To the Creators of D&D 5E content on rpgnow.com and dmsguild.com: please do more high level content 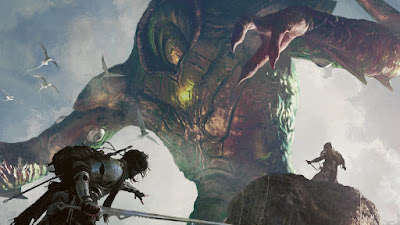 5E is just a bit low on content for levels 6-10, but it is is really weak on content for levels 11 and up right now. There are a few decent modules out there that take you up to level 15, and only one or two books out of all the content that address high level gaming beyond that. We have an occasional product on dmsguild.com that address the idea of epic level content (levels 17-20, or looking at what to do after level 20 is reached).

The problem is: designing content for level 1-5 is trivial, and easy. Game writers are doing this at a rate of churn that is simply extraordinary. One of the reasons for this is due to the legacy of D&D (and Pathfinder) being a game which supports 20 levels (or more) of play while in fact being most "playable" at levels 1-5 with a "feasibility cap" at level 8-10. As a result, in most prior editions of the game it was generally accepted that the average game group rarely went beyond level 10 in play, and many groups tended to hit the level 5-6 range and then stopped and moved on from there. The reason for this was primarily a matter of complexity: as you leveled up in prior editions the game got more complex, and that complexity translated into more work for the DM, more work for the players, and more time spent resolving actions in the game.

Here's the problem: I've run D&D 5E up to level 17 now and I am here to tell you that this may be the first edition of the game to keep the complexity level even and measured (if not entirely flat). My level 16-17 games have been playing out with only a modest level of complexity comparable to level 5-10 play previously. Levels 1-5 in D&D 5E remain by far the easiest levels at which to run, and are reasonably considered even easier to run than in prior editions. But from level 5 to at least level 17? The complexity is surprisingly measured and much flatter than it ever was before.

For example: Combats at level 17 are running with the same speed and complexity as the prior ten levels. They are no more or less complex than before. Part of this is the flatter math, but much of it relates to the core mechanics and the ever-important distinction of the concentration element of spells. Simple changes like concentration requirements and more intuitive rules to adjudicate advantage and disadvantage have made high level combat play out exactly like low level combat (just with, you know....more choice).

People don't necessarily realize this, though. The game's default assumptions for most prior editions have been that high level play is complex, more time-consuming and fraught with unanticipated perils for the DM. But this simply isn't true anymore; it's much better now than it ever was before, and is significantly improved over the nightmare that was D&D 3.5/Pathfinder in which DM prep was tantamount to wasted time and spilt tears. Players can, once again, think about carrying out the lives of their characters all the way to level 20 if they want. But to do so, we need more content! More high level modules, high level monsters, high level stuff to help the time-deficient DM.

So to game writers working on D&D OGL content: think about it! There's a market for higher level content, I promise you. It's worth some effort to produce some high level modules. I know I'll buy them. And, being a writer of said material as well, I need to use what time I have (on rare occasion) to try and release some useful high level content as well.