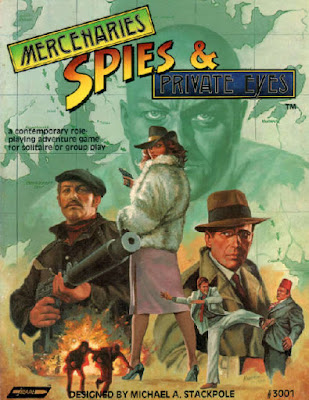 If you're an old fan of Tunnels & Trolls and Flying Buffalo (or even the later Sleuth Productions) then odds are you've either seen or played Mercenaries, Spies & Private Eyes. I own two copies of this game, as well as a third very worn original edition....getting a PDF version is a no-brainer.

For those not familiar with it, MSPE was a modern ruleset adapted from Tunnels & Trolls 5th Edition (the legendary edition everyone talks about when praising T&T, fyi). In many ways it was the definitive follow-up to T&T, and had T&T 6th edition not been mythical it could have introduced the extra mechanical features of MSPE and the game would have been perfect at that point.

MSPE is excellent for historical and modern gaming up through the nineties. It's missing the stuff you need to take it in to the internet age but I think such equipment and rules as needed could be added without too much effort. The game itself supports any range of mystery, suspense, action and adventure style drama with an emphasis on realism and verisimilitude....I have never played another game which so effectively left you with a feeling of mortal fear for your character's imminent risk of death in a gun battle, even as you blazed away to glory thanks to some amazing saves. It's a grimly efficient system for hardboiled adventure, and true to the T&T rules it is based on life is cheap and to the careful go the spoils. Like certain other historical/modern systems (Call of Cthulhu) MSPE encourages creative and smart play with realistic consequences.

You could do Indiana Jones in MSPE....just remember he's probably earned a lot of XP over the years. You could also do The Shadow, the Phantom or the 1938 Batman. Hell, you could do the Nolan Batman with this system without too much effort. It is not a system for superheroes, though....but I could see someone modding it for such.

Some of my fondest 80's gaming experiences were with MSPE. One of my most memorable convention games was around 1986 or 1987 and while I forget the name of the GM (he was known for a prolific Stormbringer fanzine back in the day) he ran this awesome game involving a squard in Vietnam looking for a group of missing POWs. It was an intense, fun experience and the game's rules were amazingly evocative of the sense of danger and urgency of being in hostile territory with death around every corner. It was Real-Effing-Vietnam instead of Fantasy-Effing_Vietnam (we got plenty of the latter out of some awesome T&T games).

This plus the recently re-released Tunnels & Trolls 5th Edition has me very nostalgic for the 80's right now. If I could find a PDF of 1st edition Gamma World, DragonQuest and a copy of the Red-on-Black Cover Palladium Fantasy 1st edition original, then the trip down nostalgia lane would be nearly complete for me!

I must think a bit about working up a blog supplement for MSPE soon that provides equipment and rules to carry it in to the 2010's. Hmmmm.

By the way, if you want to jump right in to MSPE it's one solo adventure, Adventure of the Jade Jaguar, has been available in PDF for ages.
Posted by Doctor Futurity at 3:36 PM