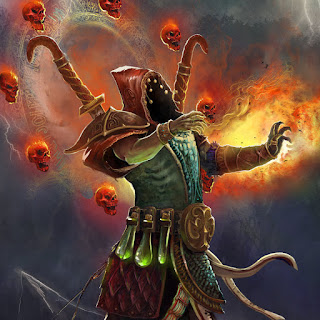 
Many are the ancient races of Enzada, and among them are some very long-lived beastkin, such as the ratkin, the egleppi and other humanoids that bear as much in common with beasts as man. These different races and their cultures have a variety of unusual gods.

Hanar the Bloody           The Lord of Slaughter
Chaotic Evil; Runes, War, Madness; Duwende Cthonic God
The duwende dwarves sought refuge under the earth five thousand years ago to escape the terrible reign of the ancient Inhuridan Empire. In their long journey into the winding byways of the deep underworld beneath the Hub of Etyri, the dwarves encountered many ancient chthonic beings that were at once threatening and benign. One such being was Hanar the Bloody, who is said to have been a great wyrm that took on dwarven form and rules the dwarves for a time as a bloody emperor. To this day, though no one knows what happened to Hanar those thousands of years ago, his memory is carried on by dedicated warrior cults who revere the Lord of Slaughter, practicing the dwarven art of berserkergang in his name.

Gold'gatha                          Lord of the Great Shiny Heap
True Neutral; Artifice, Earth, Trickery, Luc; Ratkin God
The stories around Gold'gotha’s manifestation as as many and varied as there are ratkin to tell them. The best that has been pieced together is that Gold'gotha is a great device or machine, or perhaps a massive heap of sentient rubble located deep in the caverns beneath the city of Uralhat (though some say it is far away, or in the In-Between, so who knows) that speaks prophetic declarations to its followers. The most popular story is that Gold'gotha fell from the sky and imbedded itself deep in the earth, where it has cared for the ratkin who protected it in those early days ever since. Some even claim it granted sentience to the ratkin, making them what they are today (and all of civilization thanks Gold'gotha for that).

Yaspa Rukar                    God of Frogs
Chaotic Neutral; Egleppi Deity
This mysterious non-human deity is regarded as the batrachians creator god for egleppi and other amphibious beings. His cults are a mystery to most everyone, and their purposes obscure.

Shadan Hatail                 God of Lizard Men
True Neutral; Reptillian God (primordial)
The lizard men of Selindar worship this deity, claiming it is their creator god, a being from beyond the stars that seeded the land with their kind when the earth was young. They do not attempt to reconcile this belief with the parallel myth of Pytharos, of the Dasamite pantheon, though some lizard men in that region claim Pytharos was the first immortal demiurge of their kind, created as a son by Shadan Hatail.


The chief deity of the ophidians is the god Azan Serak, an ancient deity that they claim was the father of Drod the star God. The ophidian cults feel that Azan Serak forged the very substance of time and space as an experiment, and from this weave of the cosmos he sent forth his spawn, of which Drod was but one, to tunnel through it to see what his creations had wrought. They feel that all life on Enzada evolved naturally as a course of the cosmic weaving, and that Pytharos was simply the greatest of an ancient legacy of their kind, who created humanity and their ilk in a clever alchemical experiment. 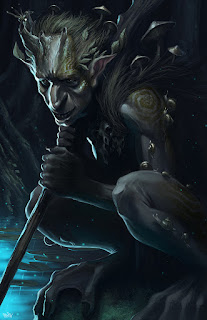