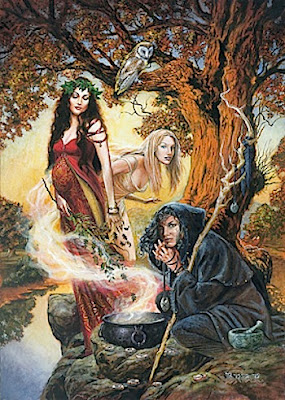 
Before the rise and fall of the Inhuridan Emprie was an ancient time, before man developed metal tools and writing. The pre-Inhuridan gods are ancient and powerful, but often completely forgotten. Once they may have been a thriving pantheon, but now only a few are still remembered and worshipped.

Enue                   Lady of Flowers and Spring
True Neutral; Charm, Earth, Plant; Pre-Inhuridan Goddess
Enue is the benevolent goddess of Springtime and the budding flowers it brings. She is a nature goddess, said to have been more prominent in ancient pre-Inhuridan times who survived the time of the empire as a household spirit that oversaw the safety of small gardens and groves. Today, she is regarded as little more than a protective spirit who blesses households that grow flowers, but some scholars mention that some of the oldest and most ominous ancient ruins, especially those overgrown with deadly flowering plants have been attributed to her ancient pagan temples.

Enana                 Goddess of the Primal Moon
Neutral Evil; Charm, Trickery, Animal, Magic; Pre-Inhuridan Goddess
The mysterious goddess of Enzada’s primary moon (Theia) is a mysterious and dangerous goddess, said to be the patron of witches and lycanthropes, a primal woman whose merest kiss can induce lycanthropy in those she bequeaths favors to. Enana was one of the ancient pre-Inhuridan pagan goddesses, much like her sisters Enue and Sitra, who have survived into modern times thanks to mystery cults that prosper in the back alleys and byways of the Hub of Etyri. Enana is rarely worshipped in the open save on moonlight nights in sacred groves by witches. The worship of the moon as a signifier of the harvest is reserved for her companion deity, the Vadradasha, a southern moon god adopted from the Dasamites.

Sitra                    Goddess of the Depths
True Neutral; Darkness, Earth, Plant; Pre-Inhuridan Cthonic Goddess
This may well be one of the oldest chthonic earth deities worshipped in the region. Sitra’s name and appearance have changed over the ages, but she is regarded as a goddess of the old harvest, though from ancient temples it is clear she once demanded blood sacrifice to insure the crops grew. Sitra today is regarded as a dark pagan spirit of the earth, lurking in the depths of the underworld where she lies coiled amongst her subterranean kin. Though humans worship her mostly in rural communities and mountain towns, the duwende dwarves for reasons unknown only refer to her in curses and spite; legend has it that the goddess personally cursed the duwende long ago in exchange for letting them seek refuge beneath the earth during the reign of the Inhuridan Empire. The only blood sacrifices offered to her today are of farm and game animals.

Priogar                             The Architect
Lawful Neutral  Inhuridan Deity (surviving)
Priogar was one of the last ancient Inhuridan gods, said to have belonged to a great pantheon worshipped only by the Daharesh elite and regarded as “gods among gods” by all. There are hints that these gods were ascended daharesh immortals who achieved divinity through unification with spirits, but how much of that is true is unknown. Priogar, the architect god, is one of the few such deities to have survived five thousand years and remains worshipped by the Eternal Order of Architect. 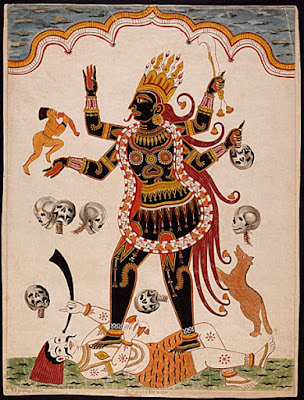