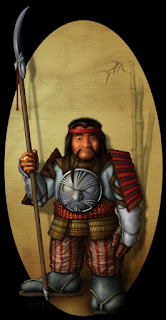 Uthitin and Duwende: the stout Half-folk
The stout short race of halflings called the Uthitin are but one of a number of short folk who dwell thoughout the world of Enzada. Most half-folk are known for being only about half the height of normal men, but the uthitin (literally “wily and short” in Selendari) are a slimmer and more gracile lot, while their stouter and hairier kin are called the duwende (a word for “hairy dwarf mountain spirit” in the Vanzarik tongue).

Physically Uthitin are equivalent to halflings , while duwende are equivalent to dwarves. They are both stouter breeds of human, however, and it is perfectly feasible for normal men and women to breed with the shorter folk. The chief selection advantage is based on the insular cultures of the uthitin and duwende, who disdain marriage with taller outsiders and in many cases make such relations an active taboo.

Many stories have arisen about the half-folk, such as a belief that they are known cannibals, imbued with whisps, and stranger. Most regular men assume that the half-folk are witches and warlocks by nature, though the reality is far removed from this superstition, and the half-folk often believe the same of normal men.

Dwuende Statistics: the duwende use dwarf statistics in the PHB. 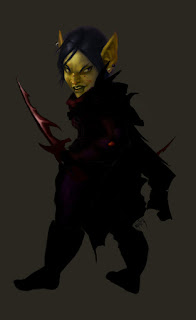 Dev: Enzadan Goblins
Sometimes also called dev, these lesser spirits in flesh are said to have been homunculi crafted as servants for the ancient empire of Inhuridan. When the empire collapsed, those homunculi who could forage for themselves bonded together with others of their kind to form a crude society. They are fearful of light and avoid the sun, as it causes a terrible pain against both skin and eyes (a trait the ancient sorcerers of the empire bred for to better control their house servants). Today, devs are a vile and unpleasant race known for its penchant for devouring other humanoids and engaging in midnight raids against humans. They are especially reviled by the half-folk and egleppi.

Traits: short, pale humanoids with luminous yellow eyes and wide maws of sharpened teeth.  Devs were born with a mouth full of stubby molars, so they spend their life sharpening their teeth to devour meat.

Dev Statistics: Dev are physiologically identical to goblins from the core rules.
Posted by Doctor Futurity at 6:00 AM