Gods of Enzada XI: Other Gods 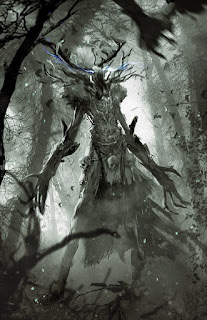 
There are many other gods from lesser sub-pantheons or specialized faiths throughout Enzada. All told there are perhaps 1,000 known cults and deities worshipped in the Hub of Etyri, a staggering number, but it is a popular pastime of the people of this land to find an interesting faith and explore it, often choosing several different and even contradictory religions throughout their lifetime. A few of the more popular gods include:

Chashar, the Lord of Beggars
Loved by thieves and beggars, they believe that appeasing this god grants them luck in their endeavours.

Yumidarin, the Hunter
This is an aboriginal god popular in the deserts of Mazadran and Waladar, believed to grant great boons to hunters who call upon him for aid. A society of Selindari rangers have taken to the worship of Yumidarin.

Gormash the Devourer
This mysterious god is revered by underworld denizens, including sarnatha and goblinkin. Gormash is a massive, toad-like figure when depicted in idols, offering a cessation to the unceasing greed and gluttony that grasps the heart of the goblinkin.

Yazda The Sword Dancer
Another deity popular among fighters who favor the sword, for it is said that Yazda was once a mortal who crafted a blade so perfect that it could cut through the fabric of the cosmos. The gods supposedly stole Yazda away to insure he crafted no more blades for mortals, and he has been a source of reverence among smiths and swordsmen ever since. Many believe that there truly is a legendary blade, the Sword of Yazda, that can cut through reality itself.

The Chimera
This mysterious and deadly god is so terrifying that most civilized realms will do everything that they can to wipe out a manifestation of the Chimera’s cult. The god is a many-formed entity that comes from the Spaces Between, and promises eternal life and a transformation to dark power in exchange for the worship of mortals; it speaks through its oracles, called the Voidspeakers, to charm and subdue humans in to serving it. Those who succumb tend to change, in horrible ways. Aberrations of all sorts are spawned from and devoutly worship this terrifying entity.

Yemash’Hatal, The Grasping Claw
This mysterious god of death and chaos is an overwhelming, terrifying entity that is said to greedily seek out errant souls for its own mysterious purposes. The followers of this god learn to feed it and to create wards against the beast , protecting their own souls at death. Many undead manifest as a result of the taint of the Grasping Claw.

Miradaka, Maiden of Darkness
This mysterious goddess often speaks to those of unusual talent from her dreadful domain in the In-Between. She is served by a decadent race that revels in pain, and offers dark pacts to mortals who seek her out.

Zaag Sal                            Keeper of the Gates of the Outer Darkness
Chaotic Evil; Demon God
Zaag Sal is worshipped in the darkest corners of the earth by aberrations, madmen and demons who have managed to gain a permanent foothold somehow on mortal soil through permanent corruption of possession. Zaag Sal is seen less as a deity and more as a cosmic entity, the being which holds fast the gates of the Outer Darkness and insures that the tidal flood of horrors in that realm cannot escape into the Mortal Plane. The cults of Zaag Sal seek to awaken him, to free him of his burden, which they believe he is forced to do by the other gods to prevent the flight of their imprisoned kind, and they want to free him so the gates may be opened wide.


This lost goddess of the Dead Kingdom was paired with Nenok Sur, and those students seeking to understand one god necessarily study Enan Tyra as well. 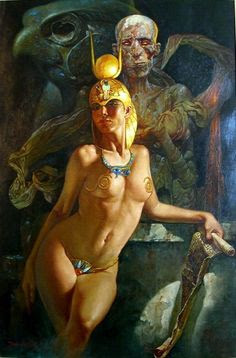