How to do your own Alien: Covenant-Inspired Traveller Campaign (Stats for Neomorphs, Xenomorphs and Androids)

First, make sure everyone has multiple PCs ready. Keep the extras in cold sleep as "reserves" just in case! As PCs are depleted, they can go to the back cold berth chamber and thaw out reinforcements.

CORE SETTING: set the game in the early 22nd century and ditch the whole Imperium setting, Traveller aliens, all that. You can roll the timeline forward and mirror the film universe. Although it is popular to use Welyand Corp. (later Weyland-Yutani) as the big bad corporation, there are other corporations out there sending colonists and miners into space (Sevastopol, for example).

TECH LEVEL: In the early 22nd century the upper limit of technology is at TL 10 with some experimental and rare TL 11. By the late 22nd century TL 11 is becoming more common with rare TL 12 tech available (the time of Aliens). By the 25th century (the era of Alien: Resurrection and beyond) TL 13 has become normal, but TL 14 remains mostly theoretical. Alien technology, such as from the engineers, suggest they achieved TL 16 in bioengineering, but may have been lower tech (as low as TL 10 or less) with relic high tech remnants in use by the time of the colony (or homeworld?) destroyed in A:C. This is up for interpretation, obviously. The actual xenoforms, of course, has no TL. 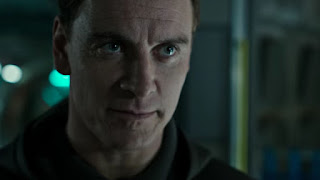 ANDROIDS: Androids ought to be a single option for one random PC. His stats should be engineered at a cool UPP of CAAAA5 with either a selection of 6 pre-programmed rank zero skills followed by a career, or a selection of 6 pre-programmed rank 0 skills, 4 rank 1 skills, 2 rank 2 skills and 2 rank 3 skills (but with no career; this is his first mission). Androids are not able to heal without some mechanical assistance, but have internal routines (nanites?) which will sustain healing at the rate a human does, or maybe slightly faster under certain conditions. Unlike a human, dismemberment doesn't kill an android, but when an android reaches 0 in two physical stats it is physically impaired but a INT (10+) check means it is still able to speak and reason. It is destroyed (but maybe not beyond repair) if all hits are reduced to zero. Androids have to adhere to a code of conduct, but they can learn new skills. Once an android is designed, it is possibly forced in to a career of choice during which it can acquire new skills.

Androids are notorious in the Alien Universe for serving the Company first, and of course there's David, the original. At the referee's discretion a player could be secretely chosen to be the "android" planted by the company to insure corporate interests are held up in the event of an unexpected discovery....

FTL TRAVEL: Jump drive in the Alien Universe takes 1D6 months per Jump, and can only get up to Jump 2 with extremely expensive drives such as on the Prometheus. By the era of Aliens Jump 3 may be feasible and down to 1 month of travel per jump. By the era of Alien: Resurrection Jump 6 and 1 weeks' travel times per jump may be feasible. These are not the carefully calibrated rules of a obsessive Alien nut, just the rough guidelines of a regularly obsessed Alien junkie.

XENOMORPHS: The alien xenomorphs are tough but can die. Assume they have about 8 points of armor with an average UPP of DCD500; Melee (natural) 3, Recon 3, Stealth 3. They deal 1D+STR Mod with claws but have AP 4 with a strike and their tail does 1/2D+STR mod but no piercing (unless you think the AvP movies are canon). Their double-jaw strike is tough: it deals 2D+STR Mod and is AP 8! It can smash through glass designed to hold tight in the vacuum of space. Xenomorphs sustain half damage from all heat sources that deal damage and are Armor 8 across their body. They sustain half damage against ordinary projectiles (slug throwers) but can take normal damage from energy weapons. They take full damage from explosive projectiles (minus normal Armor). These damage rules will help reflect that they can take a lot of damage from slug throwers (see Alien: Covenant and Alien: Isolation for examples) while the colonial marines were pretty effective with their plasma rifles, flamers and grenades.

Dealing damage to an alien is risky: if you're at point blank range a DEX (10+) roll is needed to avoid getting splash damage from their molecular acid blood. If this hits, it ignores/destroys all armor dealing 1D6 damage per round for 1D6 rounds before burning out (add negative effect per round to damage!) If you are at close range the check is DEX (8+).

Aliens likely also have regenerative properties: they seem to sustain a lot of damage before actually dying, and while we've never seen one limp off to heal, it's likely this happens on rare occasion. I'd suggest 1D healing/hour, or 1/combat round for "alien on steroids." 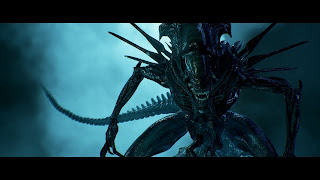 ALIEN QUEEN: If you drop an alien queen in her UPP is F9F600; Melee (natural) 4, Recon 4, Tactics (small unit, alien) 2; Stealth 2. She deals 3D+Str Mod with claws (with AP 4) and her tail does 1D+STR (and AP 2). Her massive set of double-jaws can deal 3D+STR with AP 8 (they are powerful, but in Aliens they didn't appear to be as effective as, say, the xenomorph in A:C). She can attack nearby foes with these melee attacks. She's smart enough to grasp the basics of human technology, though not perhaps anything beyond the ability to predict immediate behavior, how to open and work doors  and elevators, and maybe the general idea that someone has planted a bomb near the hive. Optional: if the queen ever gets a claw effect od 6+ on a humanoid target she automatically rips it in two pieces. 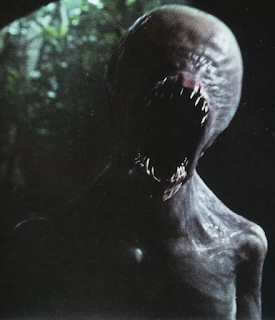 NEOMORPHS: I'd stat these buggers out as UPP AD9400; Melee (natural) 2, Recon 2, Stealth 2. They have claw at 1D+STR Mod with AP 2 and a vicious bite at 2D+Str Mod with AP 2. Unlike xenomorphs the neomorphs seem to have some sort of eerie ability to communicate, though demonstrated for exactly five seconds on screen before one is shot, and entirely unclear what the result of that communication could be.

Neomorphs are made when a host steps on or irritates the tiny bulbous eggs which reside in obscured underbrush, releasing spores which cluster and bore into an available pathway into the host. The change seems to take up to 1D6 hours. A victim pretty much can make a DEX (8+) roll to avoid contamination if they are aware they have become exposed, but it's DEX (10+) if they are not. If the roll is failed then the victim is doomed to be killed as host to a neomorph. Newborn neomorphs are still tough (UPP 6D6300; half damage from attacks). 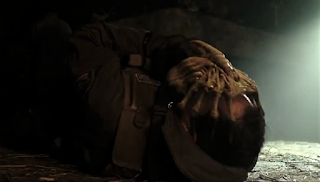 FACEHUGGERS: The facehuggers are the requisite protoform that implants an alien "embryo" (a cancerous mass that steals from the target to form a new xenomorph) into a gripped host. They emerge from the alien eggs. Facehugger UPPs are AE5400; Melee (grip) 4; Stealth 4. They can spring attack a host from a laucnh point or an egg, gaining a 1D surprise advantage on initiative for the first round of combat. A Facehugger once gripping a target's face requires an extreme STR (14+) to pull free, but damaging it will reduce this to STR (10+) although it then bleeds acid exactly like it's larger brethren, though only targets at point blank range are at risk (DEX (10+) to avoid or take 1D6 acid damage for 1D6 rounds, adding effect for each round of damage). Facehuggers can voluntarily secrete acid to burn through masks and faceplates as well. 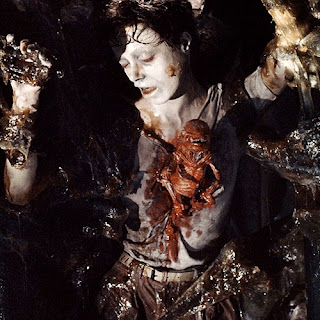 CHESTBURSTERS: These are the frail forms of the alien xenomorph before it grows rapidly over about eight hours through an undocumented process. It can appear vestigial or like a fully-formed, tiny, gossamer-like version of the adult. In this form it is mostly harmless and seeks to escape to grow. It's UPP would be 7C5300; Stealth 4. It can still bite for 1D+STR Mod and bleeds acid like the facehugger rules. 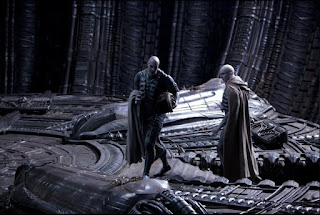 ENGINEERS: If you think there's a chance another living engineer might show up, they seem to be genetically enhanced humanoids with either an eerie compatibility with Terrans or a clear biological ancestry, possibly caused by their ancient genetic tampering (and social tampering evident in the similarities of their language to ancient proto-Sumerian dialects). Treat an engineer as a human of abnormally large size with a +2 STR, +2 CON and +2 INT, but they can pack a punch, dealing 2D+STR Mod damage with a wicked backhand. They regard all other humanoids (especially those they may have created) as inferior and react to them with potentially dangerous hostility. With what we know so far in the Aliens Universe, engineers had some sort of conflict two thousand years ago in which they almost destroyed Earth but instead destroyed their weapons' depots with the alien black goo pathogen. Engineers still exist (or did) right up to about ten years ago on at least one remote earthlike world, but these engineers seemed wofeully unequipped to deal with David; which may explain why the one from Prometheus tried to take him out quickly.

THE PATHOGEN MUTATIONS: Only a few vials of this substance seem to be left. A viral and highly destructive pathogen, it appears to at minimum dis-incorporate it's host, turning the host into the raw material for new, hostile life. If it doesn't do that it creates parasites which invade the host and spawn new, even more hostile organisms, each stage mutating and relying on further hosts to create still more, newer breeds. It is as if someone weaponized evolution. Exposure to this substance is always lethal. Indirect exposure can lead to impregnation by mutated alien byproducts (such as the squid thing and the Deacon alien). It appears possible, with time, to manipulate and program the pathogen to generate specific results through bioengineering.  If a PC is exposed, give them 2D6 hours before "detonation." Each hour the host takes 1 INT damage. When the host reaches 0 INT it goes feral and dangerous. Direct exposure leads to zombie-like mutants which gain +4 to STR, DEX and CON and deal 2D6+STR Mod damage with fists; they take double damage from fire. Many other mutation variants are possible.


Posted by Doctor Futurity at 4:58 PM