Gods of Enzada IX: The Deities of Xar 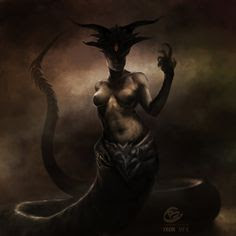 
Murga                              Mother of Monsters
Chaotic Evil        Goddess of Xar
Not much is known of the relic tribes of Xar, ancient half-giants and men descended from an empire that was utterly destroyed long ago by the Inhuridans and then scrubbed from existence for the impertinence of defiance. Murga’s worship by the aboriginals of that land predates all other gods, some say. The locals say she gives birth to terrifying new forms constantly, seeding the world with her evil progeny. The mythic end times of Xarian lore suggest she will one day give birth to the monster that devours the world.

Yhodan                            King of Dragons
True Neutral      God of Xar
Yhodan was said to be the first dragon, born of Murga. Yhodan was intelligent and keen, and saw his mother for the monster she was. He created the dragons of Enzada, and seeded the land with their kind. Yhodan is said to regard all other beings as prey for his kin, and so dragons have ever been at odds with mortals, treating them as food and prey.

Merciless                         God of Killers, the Wandering Shadow
Chaotic Evil        God of Xar
The Xar speak of this ancient being, that they claim was the Inhuridan assassin that destroyed the lost empire, but in doing so he also fell, and now his spirit wanders the land, an unreasoning slayer of all living beings.

Uthern                             God of Lost Memories
True Neutral      God of Xar
Uthern was said to have been the spirit of the last king of Xar before the empire fell, but so strong was his spirit that he carried on in the afterlife, a patron of the lost era and a boon to scholar who sought his wisdom. He is often invoked by Xaric shamans.

Warast                             God of the Ruinous Expanses
Chaotic Neutral God of Xar
Warast is one of Murga’s greater spawn, and said to have been the beast-ravager that was unleashed by Xar against Inhuridan in the last days of that war. The Inhuridan army could not lay the beast low, and at last it was dismantled piece by piece, its dismembered parts spread throughout the lands to insure it could not come back together to finish off its foes. There are strange cults of Xar to this day which worship Warast and seek to reunite its pieces, believing it will restore lost Xar and destroy the descendants of the Inhuridan lands, insuring a revival of the ancient glory of old.


Ulafdos is said to be the oldest god in Xar, predating the empire era. This is a popular rural agrarian god, bringer of rains and flood waters, keeper of crops and protector of the people. A rare benevolent deity in the land. 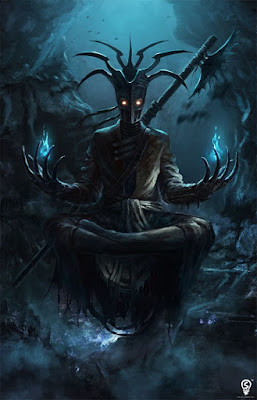