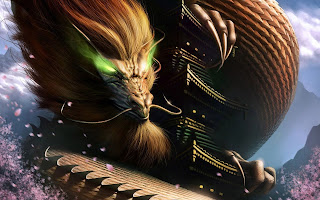 Dragons
The dragons of Enzada are ancient, and even the oldest legends speak of a time when they wandered fee, before the Inhuridan Sorcerers sought to tame them and turn the dragons in to beasts of war, fighters for the ancient arenas.
Most dragons are intelligent beings, though few can relate to the society of humanity. The beastly nature of dragons insures that they operate on a level of understanding better suited to the harsh realities of the wilds, and they eschew civilization and its trappings. They have their own distinctive language, and while they are capable of learning the many human tongues, they lack the ability to speak anything other than their draconic speech and the language of the lizardfolk.
Dragons of Enzada come in two varieties, being the wyrms, which are wingless beasts of the earth, and the drakes, which are the airborne predators of the sky, The drakes are more gracile and similar to birds, though some can grow as large as the legendary rocs of the Vanzarik Sea. The wyrms can grow much larger and are some become legendary for their size and ferocity.
Dragons are not suitable player characters, but make excellent foes. Dragons seek allies from among the many beasts and monsters of the wild, only occasionally associating with humanoids (usually lizardfolk). Many ancient dragons dwell in the ruins of the deep wilds, usually claiming the remains of some forgotten Inhuridan city where they once were held as thralls and gladiators; they prize these ruins as proof of their victory over their long-dead captors. 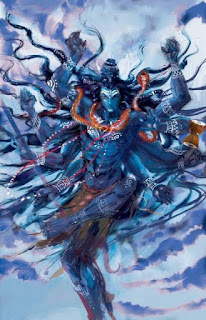 Hantu: Enzadan Demons
The hantu demons of Enzada alternately claim to come from the Outer Darkness or the Spaces Between (the so-called In-Between as it is more commonly known to mortals), but their true origins are a mystery. Some demons claim fealty to the dreadful gods Utalos or the Grasping Hand, while others revere Miradaka or the Chimera. All demons speak of a domain, a realm in some unfathomed abyss beyond so terrible that even they seek to escape it. Of those few scholars who have interviewed demons, it is recorded that the strange race claims to be escaping a much more terrifying threat, something which devoured their native realm, leaving the demons nothing more than disembodied spirits who must seek mortal flesh for possession. Their once great world, now a fathomless abyss, waqs forever destroyed by this terrible, overwhelming entity.
Enzadan demons need to possess a being before they can manifest in the flesh. Once they have possessed a mortal, they may sculpt its flesh into an image approximating the guise of their own natural form. The beast in this form can be slain or driven from the host, although the host rarely survives such an experience...sane or alive. Demons are very difficult to kill, however, for they can simply appear in spirit form and take possession of another host. For this reason, demon hunters are a feared but noble profession in Enzada, being those sorcerers and shamans of sufficient talent to slay the spirit body of the demon, going into the Spaces Between if necessary to get the job done. Some demon hunters of great renown are even known to be tieflings, who use their heritage to gain an edge against their kindred.

Giants
There is an extensive culture of giantkin in the heartland of the Hub of Etyri. Giants are rare creatures even so, and some accuse them of being distantly related to the spirits of the In-Between, given that they have a unique elemental aspect, but the giants seem uninterested in elaborating on their nature.

Beastkin
The wilderlands include whole tribes of beastkin, said to have been humans who went feral or mad and eventually degenerated back to the form of beastlike beings. Most of the famous beastkin come from Waladar’s deep wilds and the Barren Lands.
Beastkin are never given any status in civilized lands, regarded as lawless beings.

Draconians
Draconians do not exist as a race in the world of Enzada, and are instead the product of matings between the dragonkin and captive humanoids. As such, while draconians do and have existed, they have a near legendary status, and are often prized as captive thralls by nobles in the Hub of Etyri for their unique natures. (see Distant Worlds for details on what the dragonmen look like).

Dhampir
The dhampir are most famous for being an ancient breed from the region of Nepar, cursed by an ancient dalliance with the madness of the enigmatic vampires of that land. They otherwise exist as described in Enzada, and can be found abroad; Enazadan vampires are not harmed by sunlight, and so can walk among men (but are completely mortal and without their abilities by day, detectable only for the faint odor of undeath they tend to exude if they fail to perfume themselves). Because Enzadan vampires are a weird mix of spirit whisps animating corpses and being driven mad in the process, they still manage to reinvigorate the body of their host enough to procreate, and so have the dhampir come to exist. Most dhampir cannot breed, being infertile, but the Nepari tribes seem to have overcome this limitation somehow. 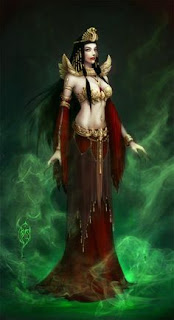 Sentient Undead
In Enzada, sentient undead usually manifest as agents of the death gods, especially Miradaka and the Grasping Claw, who use them as agents to hunt down and destroy those who seek to escape their grasp. Mohrg, wights, mummies, ghosts and some other undead appear in Enzada in this manner. Almost all undead tend to retain memories of their living selves, but something about the foreboding afterworld (or the In-Between) seems to drive them mad and simultaneously instill an insatiable hatred and envy of the living within them (even those undead who were once of good nature). 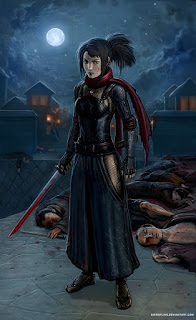 Gnomes
Gnomes do actually exist in remote corners of the world, quizzical beings of nature that congregate in small communities and are usually mistaken for Uthitin and Duwende. Gnomes are little understood as a race, but are in fact descended from another breed of spirit that has escaped permanently into the mortal world and woven bodies of flesh for themselves. The process and events of how this transpired have been lost to time, but it is suggestive that the concept of gnomes as mischievous forest spirits is not entirely unwarranted. Like most spirits or spirit-descended beings, gnomes lack a sense of moral understanding about right and wrong.