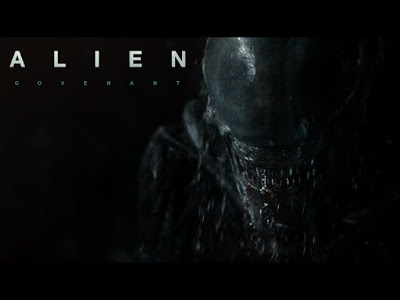 This film released in Europe already, so it's US release has been preceded by a round of reviews suggesting everything from "meh" to thorough excitement. The common factor seems to be whether or not you wanted to see an Alien movie in the first place....if the answer is yes, then Alien: Covenant does not disappoint.

Scott's return to the Alien Universe post-Prometheus provides a direct sequel to the latter and a "still somewhat removed" prequel to the original Alien. This time around we're presented with a colony ship, the "Covenant," which hosts 2216 crew, one android, and 2,000 colonists in deep sleep. After an unexpected encounter with a stellar phenomenon the ship finds itself deep in unknown territory but still years from its destination world....and an unexpected message draws them to what appears to be (at first, naturally) a superior habitat to the world they had laid claim to.

There are some odd scenarios at work initially. If one of your main gripes with Prometheus was "Why do people in space, on starships, with degreed professions seem to act so dumb at the wrong times?" then Covenant's crew isn't 100% going to hold your faith. In their defense they play the "We totally didn't expect this to go as it all did" card just fine.....and on rare occasion even demonstrate a propensity for foresight (such as sending down an investigative team with actual weapons). But then somebody panics at the wrong moment or decides that funny stomach ache is nothing to complain about initially and BAM next thing you know stuff is exploding and neomorphs are everywhere.

Note that Call of Cthulhu fans will understand much of what goes on in this movie as basically being what happens when you fail a Sanity Check.

But seriously....it was a fun ride. I can't even get in to the latter part the film to avoid spoilers, but when the proper xenomorph arises at last it is a surprisingly fun reveal for a monster which has been known in cinema for nearly forty years now.

Of great note in this film is Fassbender's recurring role as David as well as the younger, newer model of android known as Walter. Any fan of Fassbender will be happy, but seeing him play these two roles makes the movie that much more interesting....and David, well....I'll talk more about David after the spoiler warning.

Now, is this movie worth it to the non Alien fanatic? If you liked the original Alien films but disliked Prometheus is it worth it? I'm going to suggest it is probably something both the former and latter can enjoy if you are a general fan of horror and SF....and the latter especially might enjoy seeing tighter closure on the Prometheus plot offered here (albeit at the expense of a range of new mysteries).

This film was a solid A, and only it's intermediary status as a sequel/prequel prevents it from attaining true glory. We all know how this movie had to end (more or less) and we all know where it was going to start (more or less). The two hours were just the ride from A to B.

UPDATE: After the second view I am bumping this to an A+. I just loved this movie even more the second time. So many interesting details. From a Traveller gamer perspective, this is what happens when a bunch of PCs with poor career life decisions end up cold berth traveling to a new colony world when Very Bad Stuff happens along the way. Brilliant movie in capturing the "doomed colony ship" genre that is a part of SF fiction and gaming but not seen so gruesomely well done in film (see Pandorum and possibly Event Horizon for the next best examples).

Now, for some SPOILER WARNINGS!

First, Alien: Covenant deserves kudos for giving the franchise it's first true recurring villain that isn't an alien and isn't a variant on the Peter Weyland theme. Fassbender's David is truly evil...or inimical, maybe....and his role in this and future movies is utterly fascinating to watch unfold.

Second, way for Ridley Scott to not only provide a stand-alone movie, but one which really wrap up key elements of the Prometheus film even as it clearly sets us up for something much worse to come. The way this movie leaves things.....Hooooo boy, I really hope it does well for him to carve out the next sequel or two he was suggesting could be done.

Eight things I thought were glitches, particularly disturbing, or which set up interesting ramifications for future Alien films:

1. So this was either an active Engineer planet or colony only a decade before Covenent stopped by. At the end of Prometheus Shaw and David are possibly heading off to find the engineer homeworld.....if this was it, it leads to more interesting questions about what happened to the engineers over the last two thousand years (though the possibility that their own bioengineered pathogen has something to do with it seems likely).

2. There's going to be a film novelisation and a prequel novelisation. Having seen the film now, I can't help but wonder how the prequel novel will be anything more than a protracted snuff film on paper because...well...you'll see.

3. Some sort of "neutrino emission" was described as the cause of the random anomaly. A sunspot or flare, essentially. While it was presented as a completely random phenomenon, this is freakin' space, man, and unless you buy in to the perfectly valid notion that SF writers have no sense of scale, the only other likely alternative is that there's some mechanism that triggered this effect. That was never suggested in the movie, however....which inevitably leaves one to wonder if the Covenant crew truly are less lucky than all the other crews in the Alien Universe so far. (Even the Hadley's Hope colonists were sent to LV426 and didn't stumble on to anything until corporate slimeball sent them looking!)

(EDIT: I had the thought last night that we do know this: Peter Weyland's Prometheus expedition went in to this region of space, and Weyland Corp. apparently doesn't know exactly where, but it does know it was somewhere out there.....so maybe in the last decade by "coincidence" Weyland Corp. made sure a lot of colony efforts were directed into that region of space....ergo, less unfortunate bad luck than one might think. Hmmm.)

4. About my only disappointment in the movie was Walter's confrontation with David, when it became clear David has replaced himself with Walter. I kept trying to spot the hole that should have been in his lower jaw but did not see it.....convenient I suppose or perhaps suggestive that a piercing wound like that on an android was easily sealed? Hard to say.

5. Incubation times for aliens embryos have never made much sense. If you go by the first film, then the incubation period can be at least a day or two, and the victim will succumb within hours of the facehugger crawling off to die. In other movies the time has varied wildly. In this movie it appears that the facehugger doesn't even need to be attached for very long, based on the fact that the second implant colonist was "hugged" for maybe a matter of seconds on camera? (EDIT: on second view I realize that each time an incubation period was needed the film provides a queue...think "eight bells"....and sets us up for the requisite time needed for an alien to grow up.)

Here are two fridge logic moments I am still mulling over: #1 is where did the first eggs come from, and #2 is exactly how did David engineer those facehugger embryos. It strongly implies that the "queen alien" is not the only way the xenomorphs can create eggs and breed. Alternatively, it could mean that the xenomorphs in this film, while similar, are not exactly the same as the ones found on the Space Jockey's ship in Alien.

6. So the neomorphs were a "new stage" of life from the engineer pathogen. David used the pathogen to wipe out the engineers and all life on this planet. He then....bioengineered from the pathogen's result? Tinkered with it? There was no life on the planet.....it was not entirely clear to me if the pathogen dissolved/killed everyone or if it was also mutating (EDIT: on second viewing the film says both happened). If the latter, where were the creatures? I'll be seeing this again this weekend, will maybe get a better idea then of what his vile master plan was (or how it worked out, aside from the whole "David is engaging in alien 4-H to make the xenomorph" deal which I suspect is still leaving us for more reveals.)(EDIT: on second view, there's still a question of what happened to the neomorphs or other monsters possibly created by the pathogen release, of which we know little other than that A: they are reminiscent of Gibson's Alien 3 ideas, B: they were considered inferior to the final xenomorph form by David, and C: they exhibit a creepy behavioral pattern that suggests they are not quite the be-all-end-all killers the xenomorphs are, even while being very good at it.)

7. Speaking of which, the idea that David was breeding for a xenomorph mutation seems fraught with weird implications that leave me really interested to see where the story goes next....because, of course, the xenomorphs he created could not likely be the first ones, since the ship from Alien was clearly ancient, likely a vessel from before the engineers had their destructive collapse. (EDIT: in re-watching Prometheus with my son I was also reminded of the eerie green crystal resting at the altar of what looks like a xenomorph, which of course corroborates the idea that David only rediscovered the xenomorph form, rather than created it). (EDIT #2: On seeing Alien: Covenant a second time with the extended clan I feel rather confident that the film provided a pretty cogent explanation for what is going on while leaving specifics to future exploration/exploitation.)

8. And on the xenomorph: when you see it first appear as a chest-burster, while it may be tempting to wonder why on earth it appears as a tiny, gossamer-like but fully formed humanoid, I refer only to the fact that I seem to recall Scott wanting to do exactly that in the original Alien film but not being able to make it work in a convincing manner. (It is also a creepy throwback to the Alien statuary in exactly the same position, arms stretched wide, as it imitates David.)

Posted by Doctor Futurity at 12:50 AM