Long Day - Rifts, Hasbro and DC's Convergence among other musings 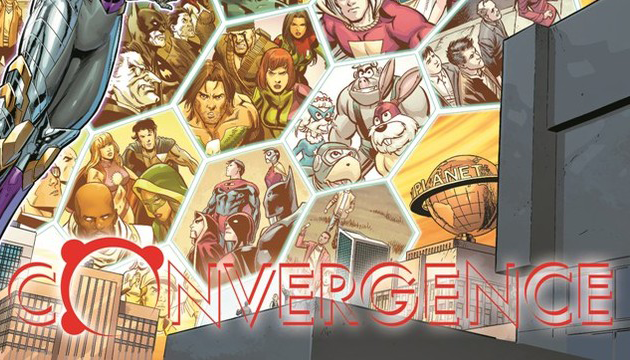 Today is going to be a long day: 24 hours without sleep now. Long story, too much "other" for this blog but I am looking forward to crashing later for a few hours before game begins. Ai!!!! So a random medley post doay:

Rifts
The Savage Worlds edition of Rifts I mentioned really is a shocker. I still can't believe that Palladium consented to allow this. It won't quite feel the same though without a long monologue in each book from Kevin explaining that the original manuscript was amazing but he still had to rewrite it entirely to suit his vision of Book X.

Hasbro on D&D
Hasbro's news that D& D "on a real tear" was cool but I am still amused that it was also grouped with Clue, Candy Land and other games in the Hasbro inventory in terms of where it stands in the corporate report. This led me to wonder if maybe somewhere deep in Hasbro's corporate network is a division of 7 dedicated developers working furiously to make Candy Land new and innovative, all glaring over at the WotC team for setting the bar to a new high.

DC's Convergence
Anyone following DC's Convergence mini-epic running this month and next? No? I'm guessing a lot of older fans habitually dodge all newer iterations of an old product without compelling evidence to do otherwise, but I happen to be a fan of the New 52 DC universe and also still a fan of (most of) the pre-New-52 universe (I followed the post-Crisis DC from around 86 through to 2000 before I finally burned out). The Convergence event, which I am told is actually a cover for DC to move its headquarters to California and not worry about having their comic lineup interrupted, is a storyline about entire cities of various realms of the DC multiverse which have been kidnapped to a distant universe where Braniac is collecting "dead cities." This has been an recurring theme for several storylines now in DC's New 52, and pretty much most of the recent weeklies (New 52 Future's End and Earth2: Future's End) have been building up to it. Anyway, this frame gives the DC authors an excuse to revisit dozens of older DC universes and cancelled books. So far it's been a real menagerie, but an unusual number of their entries date to sometime in the mid 00's prior to the major universe-revisionism that went on or back to the late 80's, when I really got into DC. It's a fun trip down memory lane but in a modern context; the interesting thing is going to be seeing what changes, if any, this new approach has on other DC books going forward.

Marvel's doing something similar with its Secret Wars, which appears to be a muddy mess of various miniseries revisiting key moments in Marvel's history while using the end-of-the-universe event they've been building up to in the Avengers titles for years now as a frame. The end result, I predict, will look alarmingly close to the Marvel Cineverse, but I could be mistaken....still, I'm going to dodge most of the Secret Wars titles as it looks like a ridiculous mess and honestly I haven't been "back" to Marvel since the early 80's, so for most of these spin-off titles they are referencing events that took place during the decades that I was almost exclusively in to either DC, Image, or Jodorowksi comics.

Plus, there are a lot of comics for these two events coming out from Marvel and DC both. For the sake of my budget a decision had to be made: and I decided it was more fun to follow the Convergence.
Posted by Doctor Futurity at 7:09 AM