Meet a primevil monster of the deep that occasionally likes to wade on land and snap up entire caravans in its claws....

CR 13 (10,000 XP)
CE huge monstrosity
Initiative +1
DEFENSE
AC 18 (natural armor plates)
HP 250 (20D12+120)
Resistance: all non-magical or non-adamantine piercing, bludgeoning and slashing weapons.
Immunity: mind-affecting, charming or illusion magic have no effect on the creature (animal intelligence)
OFFENSE
Speed 30 feet on land, 60 feet in water (swimming)
Multiattack the sea scorpion may make two claw attacks and one tail stinger attack per round as an attack action.
Melee Attack – claws +11 attack (reach 15 ft; one target of huge or smaller size), 4D10+7 damage each and target is grabbed (DC 21 to escape!) on any round in which the target is already grabbed on the giant sea scorpion’s turn it deals automatic damage plus 4D10+7 additional damage to target.
Melee Attack – giant stinger +11 attack (reach 20 ft; one target), 4D12+7 damage and target must make a DC 20 save vs. Constitution or take an additional 4D12 poison damage.
Statistics
STR 24 (+7), DEX 12 (+1), CON 22 (+6), INT 1 (-5), WIS 7 (-2), CHA 6 (-2)
Languages: none
Senses: tremorsense 120’, Perception +2 (Passive 12)
TRAITS
Swimming: the giant sea scorpion is an agile swimmer and can move 60 feet per round in the water.
Muddy Camouflage: the giant sea scorpion with time can burrow into soft muddy earth along shorelines and remain very still. Atempts to detect the giant sea scorpion when it is disguised as such are Wisdom (perception) checks vs. DC 15, with disadvantage unless the prey is familiar with the terrain.
Limited Area of Attack: the giant sea scorpion can only strike targets in front of and to its sides. If a target can remain behind the creature it can remain out of its threatened area. The giant sea scorpion has to spend 15 feet of movement turning 90 degree in one direction on land (but not in the sea) as it is so large and bulky. As such, it must spend a full 30 feet of movement to turn around and attack targets behind it.

These are the apex predators of a forgotten era of time. The giant sea scorpion isn’t just an immense sea monster, it’s the king of all of the eurypterid class of primeval sea creatures, a relic of the Ordovician era that somehow has grown to be a large or larger than a house.

Despite its name the Sea Scorpion shares more in common with horseshoe crabs. It’s stinger is still deadly and just as likely to spear through a human sized target as it is to inject its painful paralytic poison. Its claws are large enough to sunder a horse. They are rarely found far from the muddy banks and shores of saltwater lakes and seas where they dwell. The giant sea scorpion is not an intelligent creature, and efforts to use it as a “watchdog” by mad wizards have usually proven disastrous.

The giant sea scorpion is otherwise a creature of instinct. It will glide effortlessly underwater looking for whatever prey happens in front of it. On land it will wallow on to shore and then conceal itself in muddy holes while laying ambush for any large prey that passes by. 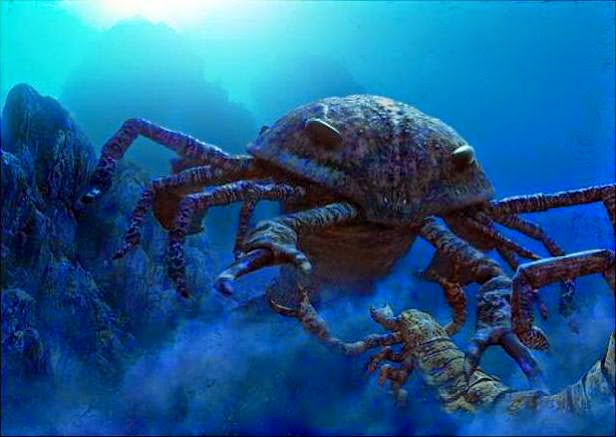