Every now and then I will be responding to a post over at RPG.net and accidentally write what amounts to a good blog post. When this happens I like to drag it over here for posterity. Anyway, first check out the start of this thread at rpg.net by Darren MacLennan and Eric Brenna here for a very thoughtful conversation about the nature and effect of emergent gameplay on an RPG's original intentions vs. what we actually use it for. Then I have my little discussion on Cyberpunk 2020 and my experience with the game in the early nineties....here: 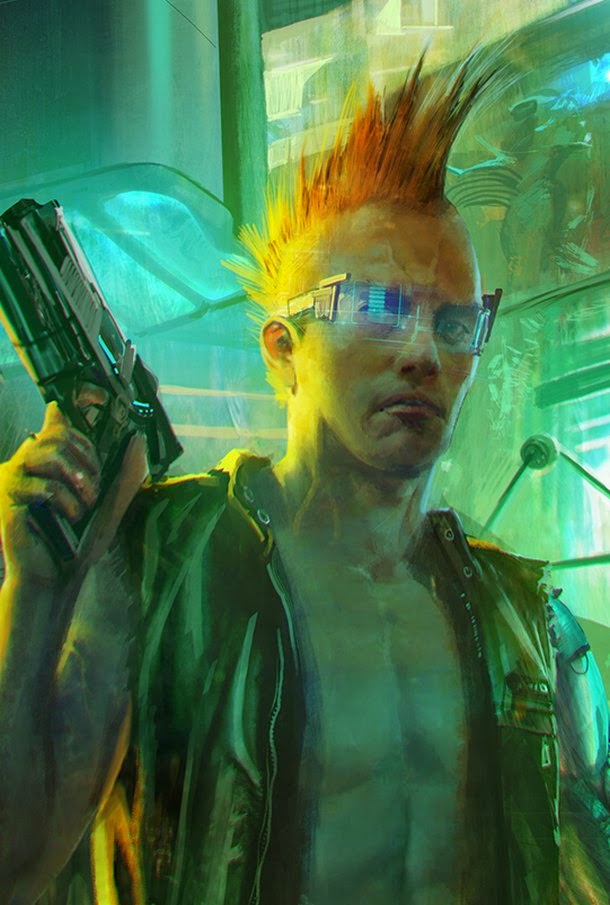 I ran CP 2013 briefly and then migrated to CP 2020 which I played semi-regularly right up until around 1994ish, and the emergent play concept holds well. When I started running Cyberpunk I was aware that it held some BGC influence (Bubble Gum Crisis, an anime, for those who don't know), but at least in my neck of the woods it was all about Akira, appleseed, Black Magic M-66 and Potlabor eventually. Finding bootleg copies with a fan translation at cons of many of these was the pinnacle of success.....and then later finding your own VHS copy was even better. Meanwhile Neuromancer defined the genre but George Effinger, Williams, Spinrad and others were regarded as equally important. Hell, even CP 2020 had a sourcebooks for Hardwired and When Gravity Fails...actual sourcebooks for running games in these CP settings.

Anyway, my CP experiences were mostly from age 17-24ish after life made it harder to keep up and I moved on. The entire time I ran Cyberpunk 2020 though, it was a weird experience, and I remember some of the experiences as follows:

First, as referee I was always discontent that the game was effectively out of date for any sort of realistic CP projection of the future almost from day one. CP 2020 has the timeline it does because it was remaining faithful to CP 2013...which when it was written was still pre-Soviet collapse. Pondsmith decided that CP 2020 was basically a fictional alternate timeline, and I think he did so for the other reason it felt outdated: his projection of 2020 as the date of a sort of cyberpunk singularity for everyone to enjoy was predicated on an assumption of technological developments that all looked theoretically possible in 1988-1990 but no one had any idea how long or what form they might take. I think he wanted the game to be as humanly close to the present as possible while still giving it thirty years to affect cultural change as a result of the CP technology. So it had stuff that was already looking funny just 2-3 years after publication, and an alt-history that still had a Soviet Union. I forget now, but I think his later rulebook (Cybergeneration and then CP 2030, the Barbie Doll edition) still riffed off of the alt-history (but correct me if I'm wrong).

Second, I observed two things, and this lends well with the topic of this thread: first was that in reading the game I found Pondsmith's (and all the authors) writing was energetic and vivid in creating the setting and feel of their universe. As a young guy in college this game was amazing, an eye opener that you could run an RPG with such weird energy and pace and feel. I wasn't entirely sure where it would go, but I sure as hell wanted to be there when it arrived. I ran games regularly for my cohorts in our group, and had two separate campaigns with two groups going at one point. CP 2020 was also a major alternative to those who did not want to play AD&D anymore, or needed a much-deserved break. It was a sharp contrast to almost everything else on the market except perhaps the other Cyberpunk-themed RPGs popping out, and they all looked like pale imitations, if only because they couldn't figure out that extra special something that CP 2020 offered in its style, writing and presentation. Ice's Cyberpunk game felt very flat to everyone I knew, for example, while Shadowrun was regarded as that Cyberpunk game that people who HAD to play elves no matter what game it was would go and play.

So I took the game's setting and ditched the history, then stuck everything pretty much as presented in 2089 instead. Then I designed games that revolved around what I could discern from the book, and what I tended to create involved, at least at first, lots of corporate intrigue, betrayal, and the common solo or fixer trying to stick it to the man while making his way in life. What the game actually tended to turn into over a matter of sessions was a furious arms race as my players worked to secure the beast gear, the best cyberware they could find just short of their total loss of humanity, and most important of all the best armor. Every campaign ended with a group of mercs looking like a small army either blowing up an Arasaka scyscraper or being blown up.

The supplements didn't help this trend, either, with lots of heavy armor and eventually dragoons and other extremely tough vehicles. It was fun, but the very last Cyberpunk game I ran in the 90's was about a gang of dragoons (basically massive guyver-like cyborgs) who patrolled the inner and outer-rim colonies of a far-flung 2090's CP which had expanded into colonizing the solar system. Their last mission was investigating a crashed mystery vessel on Titan, and discovering it was full of what were basically Warhammer 40K gene stealers. The End.

Throughout all of my CP 2020 gaming days I learned the following from my players: the game was deadly, but it offered lots of tools for overcoming that and [I]becoming very deadly[/I] instead. Players loved this, and it was something everyone could agree on. No one was playing a rocker or a journalist type looking to enact social change, but everyone was playing a solo, fixer or netrunner looking for the big score, that one hit against The Man in the form of CP's myriad corporate villains which could land them either retirement or enough firepower to stand up against a small army. It was a jet-fueled power fantasy for most of my players, and I was guilty of fostering this because I'd always give them what they wanted, with more big guns and more big bad guys to tangle with, in an ever-escalating arms race.

I think I'd run CP very differently today....been thinking about it, actually, although I'd keep it in my alt-version 2089 era and necessarily update any outmoded tech in the book. In fact, I really wish RTG had the means to do this themselves....just do CP 2020 but make it...I don't know...CP 2050 with a clean rewrite of the setting, still evoking what it is but with the sensibilities and technology of today, as well as the appreciation for just how troublesome an ASI based singularity looks around that time. We've got Eclipse Phase, sure....but it's just not as fun to read. 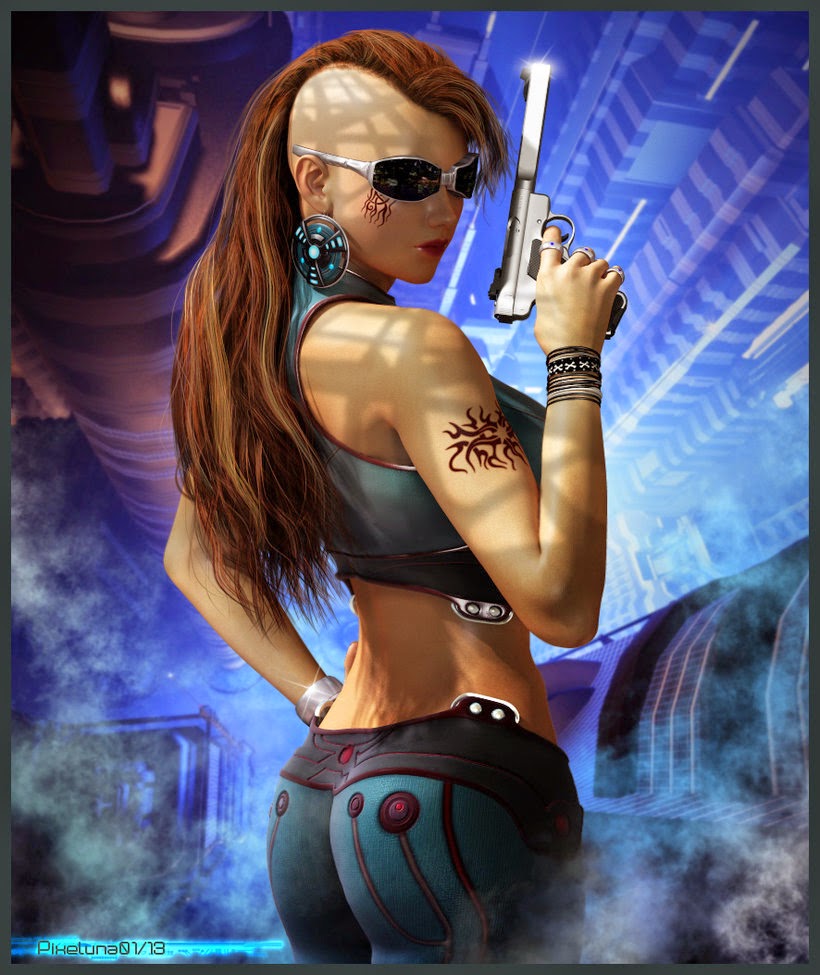 ...one other observation postscript to the above. Eric in his start of the thread references Streets of Fire, as 80's a movie as we'll ever get. I loved that movie back then though I find it hard to watch now, but I have to say, I never once associated Streets of Fire with Cyberpunk 2020 or anything close to it. SoF to a kid of the 80's was more like some sort of retropunk event, and it might overlap with Cyberpunk on the "-punk" part of the venn diagram but that was it. That said, in reading it now and looking back on my formative decade there, I have to say I probably agree with his use of Streets of Fire to reflect some of the feel of what Pondsmith was going for.
Posted by Doctor Futurity at 6:00 AM

Email ThisBlogThis!Share to TwitterShare to FacebookShare to Pinterest
Labels: cyberpunk 2020